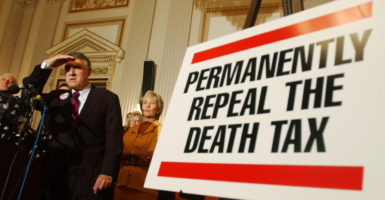 "The negative effects of the estate tax make permanent repeal the only solution for family businesses and farms," says a coalition of about 150 national business and trade associations. Pictured: Then-Sen. Jon Kyl, R-Ariz., speaks during a rally urging repeal of the tax on June 18, 2003. (Photo: Scott J. Ferrell/Congressional Quarterly/Getty Images)

A bill to repeal the estate tax, often called the death tax, has the support of about 150 national business and trade associations that signed on to an open letter to the sponsors of the legislation.

“We appreciate your work to lead the country towards a commonsense tax code that does not impose a destructive double or triple tax at death,” reads the letter Wednesday from the Family Business Coalition addressed to Sen. John Thune, R- S.D., and Rep. Jason Smith, R-Mo.

“The negative effects of the estate tax make permanent repeal the only solution for family businesses and farms,” the pro-business groups add.

The Family Business Coalition’s letter, which includes the logos of the dozens of involved associations, highlights four main reasons for ending the infamous death tax:

1. Repeal would stimulate the economy and help create jobs.

“In 2017, the Tax Foundation found that the U.S. could create over 150,000 jobs by repealing the estate tax. A 2012 study by the House Joint Economic Committee found that the death tax has destroyed over $1.1 trillion of capital in the U.S. economy—loss of small business capital means fewer jobs and lower wages.”

2. Revenue from the estate tax represents only about half of 1 percent of all federal revenue.

3. Polls show most voters support doing away with the tax.

“Typically, two-thirds of likely voters support full and permanent repeal of the death tax. People instinctively feel that the estate tax is not fair. A 2017 NPR/Ipsos Poll found that 65 percent of respondents favored repealing the estate tax, including 51 percent of self-identified Democrats polled.”

“The death tax is unfair. It makes no sense to require grieving families to pay a confiscatory tax on their loved one’s nest egg. Far too often this tax is paid by selling family assets like farms and businesses. Other times, employees of the family business must be laid off and payrolls slashed. No one should be punished for fulfilling the American dream.”