Justice Ginsburg Is Back at the Supreme Court, and She’s Sending a Message 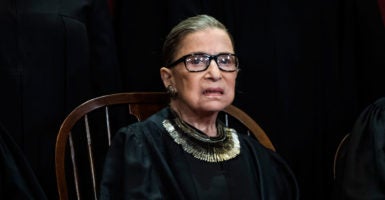 Though Justice Ruth Bader Ginsburg was not present for the Supreme Court’s January sitting, she continued to participate in cases by reading argument transcripts and legal briefs from the parties. (Photo: Jabin Botsford/The Washington Post/Getty Images)

Justice Ruth Bader Ginsburg took the bench at the Supreme Court Tuesday, the first time she has heard arguments since her treatment for lung cancer in December 2018.

The justice’s presence at Tuesday’s arguments was expected—the high court’s public information office announced Friday that Ginsburg would participate in a private conference among the justices to discuss pending petitions.

At 85, Ginsburg sometimes appears frail, moving at a slow shuffle with her head slumped at the shoulders. But her entrance in the courtroom Tuesday was unusually vigorous. She darted quickly to her seat beside Chief Justice John Roberts with her head aloft, cheeks locked in a broad smile.

As is often the case, Ginsburg asked the first question at Tuesday’s argument, pressing attorneys just moments after the proceedings began. Though she is usually a subdued presence—and sometimes almost inaudible—Ginsburg advanced her question Tuesday with strength and clarity.

All told, Ginsburg’s demeanor strongly suggested that she is aware of untoward speculation as to her health in recent weeks, which she sought to immediately dismiss as unfounded. The Daily Caller reported in January that “gingerly preparations” for another Supreme Court vacancy were underway at the White House and among conservative legal groups, in view of Ginsburg’s continued health struggles.

The justice has been seen twice publicly since the December procedure, called a pulmonary lobectomy, at the Sloan Kettering Memorial Cancer Center in New York. TMZ spotted Ginsburg Monday at Ronald Reagan Washington National Airport in Virginia, where she told reporters that she is doing “just fine.”

Ginsburg also attended an event honoring her life and professional accomplishments at the National Museum of Women in the Arts in Washington on Feb. 4.

Though Ginsburg was not present for the court’s January sitting, she continued to participate in cases by reading argument transcripts and legal briefs from the parties. She cast votes on matters relating to a Louisiana abortion law and the 2020 census, among other topics.

As compared to relatively recent crises of disability on the high court, Ginsburg’s absence was fairly mild. Former Chief Justice William Rehnquist missed over 40 cases between 2004 and 2005 after a thyroid cancer diagnosis. In recent decades, other justices have resigned for psychiatric reasons or continued to hear cases despite growing evidence of cognitive decline.

Her return is also timely given the slow pace at which the court is currently moving. The justices will hear just seven arguments in the February sitting.

Ginsburg’s doctors have indicated there is no evidence of remaining disease following the surgery.