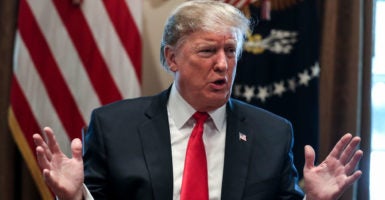 The White House announced Thursday President Donald Trump would sign the legislation. The House is expected to pass the legislation imminently. (Photo: The Washington Post/Getty Images)

“President Trump will sign the government funding bill, and as he has stated before, he will also take other executive action—including a national emergency—to ensure we stop the national security and humanitarian crisis at the border,” said White House press secretary Sarah Huckabee Sanders in a statement. “The president is once again delivering on his promise to build the wall, protect the border, and secure our great country.”

John Malcolm, vice president of the Institute for Constitutional Government at The Heritage Foundation, wrote in a January Daily Signal op-ed,“Trump has a strong argument to make that he, in fact, has the authority to act unilaterally.”

Sen. Marco Rubio, R-Fla, expressed concern over Trump’s decision, saying in a statement, “We have a crisis at our southern border, but no crisis justifies violating the Constitution. Today’s national emergency is border security. But a future president may use this exact same tactic to impose the Green New Deal.”

Rubio added he would wait for further details, but was “skeptical” he would support the national emergency declaration.

The passage and signing of the spending bill will ensure there is not another government shutdown.

The 1,159-page spending bill includes funding for the last seven departments lacking a budget for the 2019 fiscal year.

“When one bemoans the swamp, look no further than House Democrats jamming through an over 1,100 page piece of legislation when lawmakers were given less than 24 hours to read it,” Rep. Chip Roy, R-Texas, said in a statement provided to The Daily Signal, adding:

We should be a no on such incompetence. I did not come to Washington to recklessly spend hard-earned taxpayer dollars, particularly when our nation is $22 trillion in debt and counting.

Rep. Mike Johnson, R-La., chairman of the Republican Study Committee, said in a statement provided to The Daily Signal that his caucus has “many concerns about this legislation, beginning with the process.”

“The conference committee members were given just one hour to approve nearly 1,200 pages of text, the final bill was filed after 1 a.m., and members are expected to vote on it [Thursday night],” Johnson said, adding:

This legislation encompasses about a quarter of federal discretionary spending and will directly affect all Americans. I dare say not a single lawmaker voting for it [Thursday] will have even read the bill.

We know how that turned out with Obamacare, and now we are basing the security of our nation on the same failed, ‘pass it to see what is in it,’ system. This is unacceptable.

Rep. Tom Graves, R-Ga., tweeted, “With 30 minutes notice, I was allowed 1 hour to review and had to make a choice.”

Justin Bogie, a senior policy analyst in fiscal affairs at The Heritage Foundation, says the funding legislation is “far from perfect.”

“It does nothing to roll back the massive spending increases included as part of the Bipartisan Budget Act of 2018,” Bogie said, adding that, “the omnibus continues the practice of using budget gimmicks to boost spending by billions of dollars each year.”

The bill includes $1.375 billion for barriers along the southern border, an amount that falls short of Trump’s requested $5.7 billion for the wall. Heritage Foundation president Kay Coles James said in a statement Thursday:

For years, The Heritage Foundation has outlined the threats posed from a porous border and called on Congress to make border security a top priority. Now is the time to take action. Unfortunately, the proposal advancing in Congress fails to provide the resources necessary to secure the border and curb spending,

Roy was also critical of the bill’s immigration provisions, saying the legislation was “a profoundly unserious approach to a very real humanitarian crisis at our southern border.”

Border funding is well below the president’s requests, and the number of illegal immigrants ICE can detain is being reduced, which will undoubtedly lead to more ‘catch and release’ policies. We made a promise to the American people that we would secure our border, and this bill falls far short of that goal.

Meadows of the House Freedom Caucus said the spending deal “is not a serious attempt to secure the border and stop the flow of illegal immigrants and criminal gang members from entering the United States.”

Rep. Matt Gaetz, R-Fla., laid blame on the Democrats for the lack of border security funds.

“The American people deserve strong border security, and the Democrats have denied them that opportunity in this committee deal,” Gaetz said.

“This legislation does not secure our southern border, does not fully fund a wall, and further cripples our national security by allowing violent criminal aliens into our country,” Gaetz added.