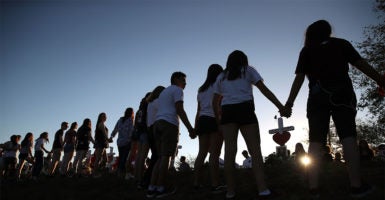 It’s been a year since the tragic school shooting in Parkland, Florida, that took the lives of 17 people. Today, we speak with Kenneth Preston, a student journalist from Broward County who helped shine light on the corruption in that school district after the shooting. We ask him about what’s changed, and what hasn’t, since that fateful day. Listen below or read the transcript a little bit further down.

This is a lightly edited transcript of the conversation on the podcast.

Daniel Davis: Today marks one year since the horrific high school shooting in Parkland, Florida. Joining us now by phone is Kenneth Preston. He’s a student journalist who helped expose incompetence and corruption in the Broward County school district in the weeks after last year’s shooting. Kenneth, thanks for being back on the podcast.

Kenneth Preston: Happy to be here.

Davis: Some of our listeners might recall that you were on the podcast last year. Give us a sense of the atmosphere now in the Parkland community as we hit this one-year anniversary and any new developments that are noteworthy.

Preston: It’s just as last year, pretty divisive, if not more divisive down here. Unfortunately, where this shooting could have been an opportunity to unite us, in a lot of ways, it’s divided the community over politics, over our elected officials. Obviously, our sheriff was removed, but most of the families and students actually supported that decision, so we’re getting some common ground here.

Moving forward, the governor is actually announcing that the school board and the Broward school district are going to come under a grand jury investigation. We’re getting accountability a year later. It’s taken quite a long time, but slowly it’s coming together.

Rachel del Guidice: Kenneth, after the shooting, you investigated your school’s policies and found, among other things, that the Broward school district failed to spend over $100 million of federal money intended for school safety upgrades. Can you give us a refresher on what they were supposed to do and what you found in your report?

Preston: So I just keep finding more and more and more money that’s cooked through these books. There’s hundreds and hundreds of pages as part of these reports—they’re financial statements. So I slowly just did a little bit of accounting, double-checked everything, and found that there were about $100 or so million that our school board had budgeted for school safety that they had not spent. They had spent something like $5 million—about 5 percent of that money.

So essentially, what that means is the fire alarms would have been upgraded to be able to have what’s called “a positive alarm sequence.” It would delay the alarm, so that if there wasn’t an actual fire—if there wasn’t any smoke—they were able to prevent the alarm from sounding. It gave the office the ability to observe, see if there was an actual threat that set off the alarm.

Obviously, in Parkland, there wasn’t an actual threat of fire or anything of that sort. What happened is everybody on the third floor ran out of their classrooms as a result of that alarm going off. So a lot of the students ran directly into the line of fire.

Had they taken that recommendation and implemented that recommendation for a positive alarm sequence, that wouldn’t have happened. The students wouldn’t have run out. That’s not to say that no students would have died on that third floor, but we know of the ones that ran out, there would have been no reason for them to have run out if not for that fire alarm.

del Guidice: Would you say that the school has been responsive to your criticisms and the findings you’ve published, or not responsive?

Preston: The school board has neglected duty at every turn. The first thing that they told me was that it was fake news. That some of my claims were a danger to the district. One board member went as far as to say that I was exploiting bloodshed for personal gain. And the general tone for the first few weeks was, my report was entirely bogus, everything that I said was completely untrue.

I’ve been vindicated since in the last few months. Everything has sort of started coming true. They finally admitted: We’re hundreds of millions of dollars behind, we were supposed to spend “x” amount of money, now because of inflation and this, that, and the other, we’re not going to be able to meet those deadlines, we don’t have enough money. They’re wanting $2.6 billion overall for the program now.

On top of that, when I had said that I believe that these leniency programs had aided and abetted this shooter, they said it was, again, fake news, completely untrue. We found out that that student was referred to one of those programs. The district has either been so incompetent that they can’t get the truth straight, or is consistently lying. Either one of those is fairly concerning.

Davis: Wow. Well, we saw a couple of weeks ago Sheriff Scott Israel dismissed by Florida’s new governor, Ron DeSantis, over those failures to respond to the shooting. You tweeted back in January that “the Parkland families are finally getting justice.” How do you hope the new sheriff will contribute to bringing justice to these families?

Preston: So the new sheriff can do a few things. One, as you’re already seeing him doing, he’s sort of ridding the department of all the sort of political cronies that our former sheriff had. Honestly, the sheriff’s office should not be a political agency. It should be exactly that—a sheriff’s office.

I think it’s the third-largest policing agency in the United States. It’s a huge responsibility. What he’s doing is he’s stepping up active shooter training, mass killer training, things of that sort, because obviously the deputies were not at all prepared.

There were, I think, nine in total that never entered that building. You can’t really blame it on that one deputy. I mean, we obviously place blame on him, but you can’t just say that it was that one deputy’s buckling because, honestly, this was a failure of training. No one seemed to have known what to do that day. Everybody buckled under that pressure.

So he’s stepping up trainings in a way that we really appreciate. Beyond that, we’ll just have to see because, again, with these discipline programs—the PROMISE program, in particular—is an agreement between the school board and the sheriff’s office. And if the sheriff’s office pulls out, the school board has no choice but to have to sort of put that program to the side.

So he can hopefully, for us, do two things. One, step up the entire training of the department, make sure that they’re more ready for an event like this. And the second would be to pull out of some of these dangerous discipline programs we have in Broward County.

del Guidice: So Kenneth, since Parkland, we’ve seen a large student movement pushing for gun control, largely led by David Hogg. He’s a student from Parkland. What is your take on the state of the March for Our Lives movement?

Preston: I actually haven’t heard too much of them recently, and the interesting thing is, one of my really good friends is actually one of the founders of the movement. And for me, this is something that’s not particularly political.

Andrew, who I work with very closely, one of the fathers, went to the White House around this time last year and was just yelling his heart out and talking about more than anything, after 9/11, we fixed it. And after Columbine, we should have but we didn’t. After Sandy Hook, we should have but we didn’t. And what he committed himself to at that point, he said, “I’m not doing the political side of things. I just want to fix it.”

And that’s what our last year has been. We have tried everything. We have won a school board race, we have worked tirelessly to expose some of their failures. So for us, this hasn’t been so much political. I’m not going to go after the kids because they actually did something pretty incredible for us in providing this community with a platform, that otherwise, I’m not sure that we would have had the accountability.

They didn’t fight alongside us for a lot of that accountability, but we were able to take that platform that Parkland was given because of the marching, because of the increased publicity around our county, and take that and use it in a way that’s meaningful. I’m just not interested in the politics of it.

Davis: From a pure policy perspective, what would you say are some of the big areas that still need reform in school safety?

Preston: To this day, the schools down here in Broward County remain unsafe. Some of the things that we need to do, that just seem like common sense but apparently aren’t, is our schools and our police agencies need to communicate. Because the FBI, the sheriff’s office, and the schools all separately knew that this student was a threat.

Davis: Well, you can follow Kenneth Preston @kennethrpreston on Twitter. He’s a student journalist who has done lots of reporting on this issue of school safety. Kenneth, thanks so much for joining us back on the podcast.

Preston: Happy to do it.