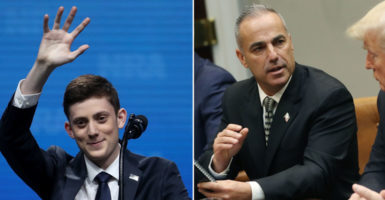 One year after the school shooting in Parkland, Florida, that left 17 students and staff dead, Kyle Kashuv and Andrew Pollack have emerged as two of the most prominent and outspoken critics of Broward County officials and defenders of the Second Amendment.

Pollack, who lost his daughter Meadow, 18, in the massacre on Feb. 14, 2018, founded the grassroots organization Americans for CLASS (Children’s Lives and School Safety) and refers to his movement online with the hashtag #FixIt.

The shooting at Marjory Stoneman Douglas High School, in which 17 others were wounded, left many families irreparably changed. The Broward County school system has been in turmoil for the past year.

“We’ve been in a war this past year against Broward’s corrupt elected officials,” he told The Daily Signal. “They failed to stop the shooter, failed to confront the shooter, and are now failing to work for the community. Everything is a cover-up, and the media got the story dreadfully wrong.”

I’m always working. I never stop. Right now, I’m working on making sure that the school board and superintendent are held accountable for their actions. I’m here, ready to help the new sheriff and governor with whatever they need. Just fighting day in and day out for accountability. That’s my life now—accountability.

“If not for them, my daughter would still be with us today,” he said. “In short, we need to clean house.”

Florida Gov. Ron DeSantis, a Republican, this week asked the Florida Supreme Court to have a grand jury investigate school safety practices throughout the state and how officials have followed them, specifically Broward’s response to the Parkland shooting.

Pollack and Kashuv were present at the press conference where DeSantis announced his intentions.

Kashuv, 17, was a student at Stoneman Douglas High School at the time of the massacre. He has since become a defender of the Second Amendment on national television and begun working with Turning Point USA, a group for conservative young people.

Now a senior, Kashuv no longer attends the school, but he told The Daily Signal that he looks forward to starting college, wherever he might end up.

Kashuv said that “sadly, not much has changed” in the year since the shooting.

“We still have the school board officials up there who allowed this to happen. We still have a terrible superintendent. Our school safety really hasn’t much changed,” Kashuv said.

“And when you look at the national level, nothing much has changed since March, where we got the STOP School Violence Act,” he said of legislation sponsored by Rep. John Rutherford, R-Fla., which Congress passed and President Donald Trump signed into law.

The law already has distributed $75 million in grants, including $4 million to Florida, for school safety across the nation, according to Rutherford’s office. An additional $100 million in grants is part of the new spending bill.

“[T]he only reason change is occurring down here is pretty much because of Andrew Pollack and how hard he’s fighting,” Kashuv said.

“The biggest conclusion that I’ve come to this past year is that the gun control debate has [been] fruitless for both sides,” he said, adding:

The right really hasn’t gotten anything done; the left, either. And the gun control debate has really overshadowed that 80 percent of things that we can all agree upon in the middle. And that’s what, really, I’m returning to fighting for, holding our government officials accountable.

Kashuv, reflecting on the lessons learned in the year since the Parkland shooting, says he wants to return to a more pragmatic approach as he uses his greater prominence to work for change.

“It’s humbling,” Kashuv said of his growing platform and reach, “and it’s even more humbling that a lot of the people who I really look up to have rallied around me to help me and assist me. And that’s something that I’ll always be eternally grateful for.”

“Mr. Pollack could have quietly mourned and stayed out of the political circus that followed the shooting,” Kashuv said, “but instead he committed his life to ensuring that no student should ever face the same fate as Meadow.”

This article has been corrected to reflect that the STOP School Violence Act is now law.