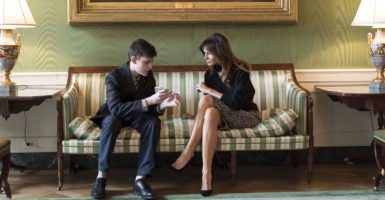 Kyle Kashuv is offering full scholarships to Marjory Stoneman Douglas students who would like to attend Turning Point USA's High School Leadership Summit in July. He is seen here with first lady Melania Trump at the White House on March 8. (Photo: Andrea Hanks/UPI/Newscom)

The pro-Second Amendment activist at the Florida high school where 17 died in a school shooting in February is inviting his fellow students to attend a high school leadership summit in Washington next month.

Turning Point is a nonprofit youth organization that promotes the principles of fiscal responsibility, free markets, and limited government.

“All of my fellow Marjory Stoneman Douglas students are invited to receive the full scholarship, and I implore them to take us up on the offer,” Kashuv told The Daily Signal. The scholarship will cover travel, lodging, and other expenses.

We updated our speaker list for #HSLS2018! There are still more to be announced!! @TPUSA https://t.co/0WPhOayBVg

Who are you most excited to hear?

“[Turning Point founder Charlie Kirk] and I made this scholarship, because we didn’t want any of my classmates to have any reason not to come to the event. We also knew it was important that the students that have not been able to garner much media attention get a voice and have the opportunity to speak with lawmakers,” Kashuv said. “[The summit] will be a great opportunity for that.”

The summit will be an opportunity for Parkland students and other young people from across the country to engage in political discussions. They will hear from many prominent political figures and commentators, including Donald Trump Jr.; Rep. Steve Scalise, R-La.; and Anthony Scaramucci, who served briefly as White House communications director.

Kashuv is grateful for the mentorship he has received himself.

“I know the power of mentorship, because I have witnessed and experienced it firsthand through Ben Shapiro, Charlie Kirk, and others,” he said. Shapiro is the editor-in-chief of The Daily Wire.

Kashuv says his classmates can experience an environment at the summit where their voices are heard and their questions are answered.

I didn’t get to speak at the March, but I’ll be speaking at TPUSA High school leadership summit about School safety. Thanks for the opportunity @KyleKashuv. Encourage everyone to sign up!

He said the media largely ignored more conservative-leaning students after the deadly Feb. 14 shooting in Parkland, devoting their coverage to David Hogg and other students favoring tougher gun control laws.

But Kashuv says that Parkland students like him aren’t the only ones who have not received fair media attention.

June 18 marked a month since the deadly school shooting in Santa Fe, Texas, which didn’t get nearly as much media coverage as the one at Marjory Stoneman Douglas.

Although the media descended quickly upon the small Texas town, they soon disappeared after finding many of the students and their families supported the Second Amendment. The shooting, which left 10 people dead, has largely been ignored by the media since then.

“It was really unjust to see that Santa Fe got very, very little coverage versus Stoneman Douglas,” Kashuv said.

“Really, it shows that the left is utilizing school shootings in specific instances to push their gun control narrative,” he said.