How Tech Giants Are Banning True Speech About Biological Sex 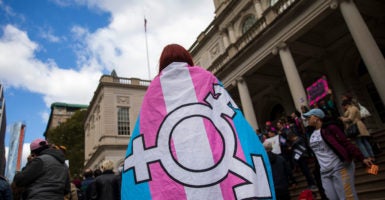 Like a strong cocktail that promises a quick buzz, social media offers us instant gratification that can be hard to resist.

But just as alcohol disguises the smell of chemicals, social media hides the bitter poison of identity politics—a poison that increasingly dominates the content we read.

This toxic cocktail is killing our freedom to speak the truth. And sadly, some of the world’s most powerful companies are siding against freedom and truth.

Twitter’s latest move against free thought came in the form of a ban on “misgendering” and “deadnaming.” This essentially means users who use pronouns and names that align with a person’s biology rather than their professed gender identity will be punished.

This is a victory of feelings over facts. Big tech is enabling identity politics to dominate the virtual public square—and it’s even aiding its takeover of the real one, too.

Take the United Kingdom. In England, police have already used tweets to investigate and arrest citizens for referring to individuals according to their biology rather than transgender ideology. In two separate incidents, police responded to complaints against women from men who identify as women.

Police arrested Kate Scottow at home in front of her children and then held her in a jail cell for seven hours after transgender activist Anthony Halliday (aka Stephanie Hayden) accused her of “misgendering” him.

Halliday/Hayden also seemed to suggest that transgender activists ought to “[storm] into” a parish church to ask “robust questions” of a priest’s wife who has opposed transgender ideology.

Police also went after a 74-year–old woman named Margaret Nelson. The reason: She posted two statements on Twitter that didn’t accord with transgender ideology: “gender is fashionable nonsense” and “in life or in death, trans women are not women, no matter how many times you say it’s so.”

In the novel “1984,” George Orwell coined the phrase “Big Brother is watching” to refer to the government. Today, he’d have to include social media companies as enforcers.

Twitter’s ban on “misgendering” and “deadnaming” crosses a red line. Twitter users should be able to choose what pronouns and names they use for each other. When Twitter punishes users for misgendering and deadnaming, the company pressures us to speak untruths.

In Canada, for instance, feminist journalist Meghan Murphy testified before the Canadian Senate against the notorious Bill C-16, which added “misgendering” to the human rights code and criminal code in May 2017. In August 2018, Twitter told her to delete tweets that referred to a biological man, Ryan Kreut (who self-identifies as a woman named Lisa), as a man.

Then, last November, Murphy tweeted several rhetorical questions: “How are transwomen not men? What is the difference between a man and a transwoman?” She referred to transgender activist Jonathan Yaniv according to his biology. In the past he had filed lawsuits against female beauticians who refused to give him “bikini waxes.”

Twitter classified these statements from Murphy as hateful and permanently shut down her account. Yaniv then bragged that he was personally responsible for getting Murphy banned from Twitter.

Companies like Twitter clearly see themselves as defending transgender individuals. But they are much more passive about enforcing “hateful conduct” policies when it comes to protecting women from transgender activists.

Trans activists frequently target Murphy and others by name, referring to them as trans-exclusionary radical feminists (TERFs). A website called terfisaslur.com displays tweets like “All TERFs deserve to be shot in the head.” “All TERFS need to cease existing. Wipe them from the earth.”

Transgender activists have also targeted Kaeley Triller, co-founder of Hands Across the Aisle, a coalition of women opposed to transgender ideology, on Facebook by posting her home address and violently threatening her children.

“Ironically,” Triller says, “the least ‘safe spaces’ in the history of the world are spaces where speech is censored and dissent is punished. If people are not safe to disagree, they are not safe at all.”

Social media companies could be protecting women from the violent, graphic, and threatening content against feminists documented at terfisaslur.com, but instead, Twitter is “protecting” those who identify as transgender from the “hateful conduct” of those who simply say that we are born male and female.

The Eclipse of Women’s Rights

For a brief moment during the #MeToo movement, it seemed that women were ascending the identity politics hierarchy. But as PayPal founder Peter Thiel predicted, when conflict comes between identity groups, the solution will be brokered in a way that most benefits the left as a coalition, not any particular group.

Twitter and Facebook’s double standards are proving Thiel correct. Transgenderism is making war on feminism, and feminists are losing out.

Identity politics is poisonous to freedom. It divides Americans up by ethnicity, race, sex, sexual orientation, gender identity, etc., and ranks us in a hierarchy based upon degrees of “victimization.”

This is deeply out of step with America’s founding, which championed the legal equality of each citizen based on inalienable natural rights. It is also out of step with the way most Americans developed their identities—from their families, religious communities, and civic groups.

But as our society has become more atomized, identity politics has filled the void and offered an alternative kind of social identity—albeit a toxic one.

The Marxist struggle, which originally was seen as a struggle for power between economic classes, has been recast as a struggle between social identity groups. Individual guilt, virtue, and responsibility are replaced with collective guilt, virtue, and responsibility. And because this scheme treats the group as the fundamental unit of responsibility and agency, individual freedoms become irrelevant. At worst, they are seen as tools that “oppressors” can use to exploit the “oppressed.”

We should not be surprised, then, when incidents of identity politics seem to reveal a totalitarian streak. Identity politics doesn’t just produce a grievance culture, it produces a vengeance culture—one that never ends and can never be resolved.

When students and faculty who hold unpopular views are shouted down or even physically assaulted, we are witnessing the fruit of a tree that is rotten to the core.

Identity politics requires the jettisoning of America’s constitutional heritage. It would ultimately replace ordered liberty with a society in which freedoms are enjoyed only by those who have earned them through victimization.

Twitter, Facebook, and Apple are among 107 major companies that have endorsed federal legislation that would make “misgendering” a punishable offense. Named the “Equality Act,” this bill is anything but.

State and local bureaucrats have already used similar laws and policies to derail the careers of people like high school teacher Peter Vlaming and professor Nicholas Meriwether at Shawnee State University because they referred to students according to biology and not gender ideology.

These laws give government control over our freedom to speak and think according to the truth. The Equality Act would extend that to all 50 states.

Aleksandr Solzhenitsyn, the great Russian writer who survived life in the Soviet gulag, once told the Nobel Prize Committee: “One word of truth shall outweigh the whole world.”

As big tech seeks to restructure both our virtual and brick-and-mortar public squares according to the frame of identity politics, now more than ever, we must fight for the freedom to use language to speak the truth.