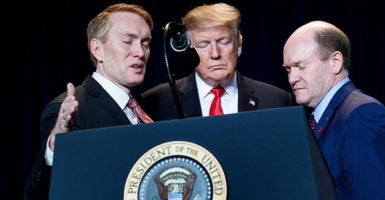 President Donald Trump spoke up for life and religious freedom Thursday at the National Prayer Breakfast, two days after making similar appeals during his State of the Union address.

“To ensure that people of faith can always contribute to society, my administration has taken historic action to protect religious liberty,” Trump said during his remarks at the Washington Hilton, later adding: “I will never let you down, I can say that.”

The president has leapt into issues involving religious freedom.

Last year, he signed an executive order to create a council to make recommendations on policy affecting private, faith-based programs. The order was titled “Establishment of a White House Faith and Opportunity Initiative.”

In 2017, Trump signed an executive order to ensure faith-based organizations such as the Little Sisters of the Poor were not forced to choose between exercising their faith and complying with an Obamacare mandate that ordered employers to pay for their employees’ contraceptives and abortion-inducing drugs.

The Justice Department and the Department of Health and Human Services last year took actions to protect Americans’ religious liberty, with HHS creating a Conscience and Religious Freedom Division.

Trump talked Thursday about the need to protect Christian adoption agencies that have faced litigation in states including California, Illinois, Massachusetts, Michigan, Pennsylvania, and the District of Columbia because of their policies on same-sex marriage and other matters related to their religious beliefs.

“We will always protect this country’s long and proud tradition of faith-based adoption,” Trump said. “My administration is working to ensure that faith-based adoption agencies are able to help vulnerable children find their forever families while following their deeply held beliefs.”

Trump spoke for about 20 minutes at the annual event in Washington, which draws religious leaders and politicians from both parties.

“All children, born and unborn, are made in the holy image of God,” Trump said to a standing ovation, repeating a line in his State of the Union address Tuesday night. “Every life is sacred and every soul is a precious gift from heaven.”

Also during the State of the Union address, Trump called for Congress to put restrictions on late-term abortion, a priority for many religious voters.

That proposal came after New York Gov. Andrew Cuomo signed legislation allowing abortions up to the time of birth and Virginia Gov. Ralph Northam, commenting on a similar state bill, openly talked about a mother and her doctors being allowed to abort a baby after it is born. Both governors are Democrats.

At the National Prayer Breakfast, the president also credited faith leaders with helping to pass the First Step Act, a criminal justice reform bill aimed at transitioning nonviolent prisoners back into society.

“Faith leaders helped us achieve historic bipartisan criminal justice reform. They’ve been wanting to do that for many, many years and we all together got it done,” Trump said. “America is a nation that believes in redemption. Every day, the people in this room demonstrate the power of faith to transform lives.”

In the audience was Andrew Brunson, an American pastor freed from two years of imprisonment in Turkey late last year after Trump interceded. This weekend, Brunson will participate in a ceremony he missed when his daughter, Jacqueline Brunson Furnari, got married while he was held in Turkey.

“This Saturday, Pastor Brunson will walk his daughter down the aisle,” Trump said. “Well, that’s great. Was I invited?”