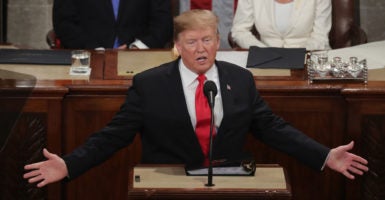 “Let us work together to build a culture that cherishes innocent life. And let us reaffirm a fundamental truth: All children—born and unborn—are made in the holy image of God,” President Donald Trump says. (Photo: Chip Somodevilla/Getty Images)

President Donald Trump advocated that lawmakers pass a late-term abortion ban in his State of the Union address.

“To defend the dignity of every person, I am asking the Congress to pass legislation to prohibit the late-term abortion of children who can feel pain in the mother’s womb,” Trump said.

“Let us work together to build a culture that cherishes innocent life. And let us reaffirm a fundamental truth: All children—born and unborn—are made in the holy image of God.”

Sen. Joni Ernst is one of the Republican senators who reintroduced the Pain-Capable Unborn Child Protection Act last month. The legislation would ban abortions after 20 weeks, with a handful of exceptions.

“At five months, we know that babies can yawn, make faces, wiggle their 10 fingers and 10 toes and feel pain. Sadly, the United States is only one of a handful of countries around the world—including North Korea and China—where on demand abortions after the five-month mark are legal. This isn’t right, ” Ernst said in a statement in January.

Trump also specifically addressed the remarks made by Gov. Ralph Northam, D-Va., about abortion in a radio interview last week. Speaking about abortion legislation in Virginia, Northam told radio station WTOP, “The infant would be kept comfortable. The infant would be resuscitated if that’s what the mother and the family desired, and then a discussion would ensue between the physicians and the mother.”

“We had the case of the governor of Virginia where he basically stated he would execute a baby after birth,” Trump said.

Northam is currently facing calls for resignation, due to his medical school yearbook page including a photo featuring one man in blackface and another in a Ku Klux Klan costume.

Northam, who initially apologized for the photo, now says he isn’t either of the men in the photo, although he says he appeared in blackface when dressing up as Michael Jackson once.

Trump also referenced New York’s abortion legislation, saying, “Lawmakers in New York cheered with delight upon the passage of legislation that would allow a baby to be ripped from the mother’s womb moments before birth.”