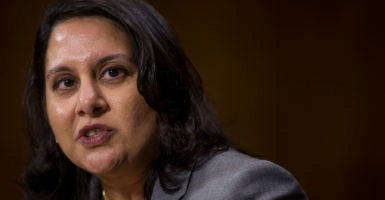 Neomi Rao, nominated by President Donald Trump as an appeals judge on the D.C. Circuit, testifies Tuesday before the Senate Judiciary Committee. Rao would fill the seat left vacant by Brett Kavanaugh when he joined the Supreme Court. (Photo: Zach Gibson/Getty Images)

The Senate Judiciary Committee on Tuesday held its first judicial confirmation hearing of the year for Neomi Rao, who is President Donald Trump’s nominee for the vacancy left by new Supreme Court Justice Brett Kavanaugh on the U.S. Court of Appeals for the D.C. Circuit.

Rao fielded questions from senators about her college writings, whether she would recuse herself in cases involving the Trump administration, her religious views, and the limits of executive power.

Rao, 45, currently serves as the administrator of the Office of Information and Regulatory Affairs, an executive branch position heavily involved in reviewing regulatory policies promulgated by administrative agencies.

The D.C. Circuit often is considered the second-highest court in the land and a stepping stone to the Supreme Court. Besides Kavanaugh, Chief Justice John Roberts and Justices Clarence Thomas and Ruth Bader Ginsburg all served on that federal appeals court.

Given the reputation of the court and its association with Kavanaugh, Rao has come under intense scrutiny from the left.

The daughter of Indian immigrants, Rao is a graduate of Yale University and the University of Chicago Law School. After graduation, she clerked for Judge J. Harvie Wilkinson on the U.S. Court of Appeals for the 4th Circuit and for Thomas on the Supreme Court.

She then served in the White House Counsel’s Office under President George W. Bush and on the Senate Judiciary Committee as counsel to then-Chairman Orrin Hatch, R-Utah.

Since 2006, Rao has been a faculty member at the Antonin Scalia Law School at George Mason University, where she focused on administrative and constitutional law. In 2017, Trump selected her to run the Office of Information and Regulatory Affairs, a post that has been instrumental in implementing the president’s deregulatory agenda.

As an expert on administrative and constitutional law, Rao is uniquely qualified to serve on the D.C. Circuit, which hears many legal challenges to actions taken by administrative agencies.

Here are four major topics of the hearing:

Several senators brought up an article Rao wrote about date rape while she was an undergraduate at Yale. In the article, she suggested that women should take measures to avoid becoming victims.

Sens. Patrick Leahy, D-Vt., and Kamala Harris, D-Calif., both implied that Rao was placing the blame on victims rather than on rapists. Rao clarified—several times—that she was simply advocating commonsense steps young women on campus could take to avoid becoming a victim. Chief among them is not excessively drinking alcohol.

It’s the same advice her mother gave her, she said, and it’s what she tells her children today. Rao clearly stated that the blame for a horrendous crime such as rape always lies with the perpetrator and never with the victim.

Sen. Marsha Blackburn, R-Tenn., a committee newcomer, pointed out that Rao has had a remarkable career and it amazed her that so much of the hearing focused on things Rao wrote more than 20 years ago as a college student.

Blackburn is right—Rao has had an impressive career. And whatever advice she offered to fellow students 20 years ago isn’t relevant to whether she will be the kind of judge who puts personal views aside and rules based on what the Constitution and laws dictate.

2. On Recusing Herself in Future Cases

Sen. Dianne Feinstein, D. Calif., the committee’s ranking member, asked Rao to commit to recuse herself in any matter that might come before her involving Trump and administrative agencies.

Rao wouldn’t give a blanket commitment but instead explained a case-by-case approach. She said she would take the issue of recusal seriously and consult the relevant statute (28 U.S.C. § 455), D.C. Circuit precedent, and the advice of her colleagues in making that decision.

But a judge’s impartiality is key to maintaining the public’s trust, and Rao was right not to make any promises one way or another about whether she would recuse herself in future cases.

Booker asked whether Rao had any LGBTQ employees, and Rao replied that she didn’t know the sexual orientation of her staff and that she takes people as they are.

He followed up by asking Rao about her personal views on homosexual relationships—are they sinful? Rao refused to answer.

Sen. Ted Cruz, R-Texas, later said this line of questioning troubled him, and indeed it should. Asking a judicial nominee whether something is “sinful” sounds an awful lot like probing her religious views, and the Constitution expressly prohibits religious tests for public office.

Unfortunately, several members of the Senate have shown an anti-religious bias in their treatment of Trump’s judicial nominees.

Examples include Feinstein’s infamous comment that Catholic “dogma lives loudly” within now-Judge Amy Coney Barrett, and the suggestion by Sen. Mazie Hirono, D-Hawaii, and Harris that membership in a Catholic service organization, the Knights of Columbus, should disqualify a district court nominee from office.

4. Executive Power and the Special Counsel

No Trump-era confirmation hearing would be complete without someone bringing up special counsel Robert Mueller’s ongoing investigation of Russia’s meddling in the 2016 election.

Sen. Chris Coons, D-Del., brought up the president’s ability to fire executive branch officials. Rao wrote an academic article arguing that the president should be able to control his administration, which includes firing agency heads.

Coons wanted to know whether Trump should be able to fire Mueller or whether Congress could insulate him from the president’s control.

Rao explained that she couldn’t comment on a matter that could come before her in court, but that a judge would have to take into consideration the competing interests of the president and Congress. She acknowledged that these are tough legal questions.

After more than two hours of questioning, it’s pretty clear where these senators stand on Rao’s nomination. It’s interesting that, although the left bemoans the fact that too many of Trump’s judicial nominees are white men, they aren’t satisfied when Trump nominates a woman of color to such an important judicial vacancy.

Neomi Rao’s race and sex have no bearing on what kind of judge she will be, nor should they. Rao explained that as an appeals court judge, she would treat all parties before her equally, follow Supreme Court precedent, and decide cases based on what the law and Constitution demand, not based on her policy views.

That’s exactly what all judges should do, and for that reason, the Senate should confirm her.