How Biden Can Avert a Crisis in North Korea 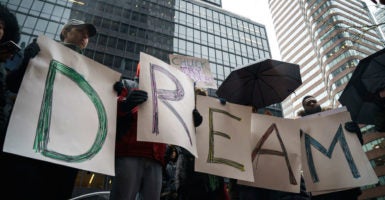 Activists rally for the passage of a "clean" Dream Act, one without additional security or enforcement measures, outside the New York office of Sen. Chuck Schumer, D-N.Y., Jan. 17, 2018. (Photo: Drew Angerer/Getty Images)

New York state lawmakers approved a measure that aims to dole out millions in taxpayer-funded aid to “Dreamers”—who entered the country illegally—attending college.

The now Democratic-controlled New York state Legislature on Wednesday passed the Dream Act, legislation that would make thousands of “Dreamers” eligible for financial aid to attend public colleges in the state. The bill, which has attracted praise from Democratic New York Gov. Andrew Cuomo, would cost $27 million.

The measure is “a slap in the face for all the hardworking taxpayers who play the rules and struggle for the costs of a college education,” Republican state Sen. Daphne Jordan said of the bill.

Jordan was joined by other Republican state legislators in criticism of the Dream Act, who argued it would unfairly take money away from legal residents who struggle to pay their college tuition.

The bill had been introduced in the New York Legislature before, but Republican control of the state Senate had prevented it from moving forward—until Democrats gained control of both chambers after the 2018 midterms.

“We do this as a symbol that you will be guaranteed an education and that the door to higher education is open to all children of New York State,” stated De La Rosa, sponsor of the bill and immigrant from the Dominican Republic.

While Cuomo has not yet signed the bill into law, he has expressed support for tuition for illegal immigrants and he has already included his own version in the state budget plan.

Passage of the Dream Act came one day after New York legislators passed a bill dramatically expanding access to abortion. The bill, which was promptly signed into law by Cuomo, allows women to have abortions after 24 weeks in situations where “there is an absence of fetal viability, or at any time when necessary to protect a patient’s life or health.”