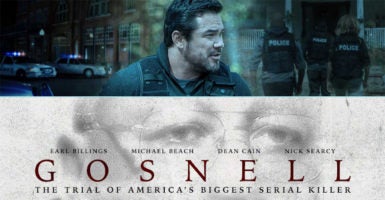 “‘Gosnell’ is the movie that the mainstream media and Hollywood don’t want you to see, but the public really has an appetite for the truth," says film producer Phelim McAleer of "Gosnell: The Trial of America’s Biggest Serial Killer.” (Photo: Official Gosnell Website)

Ahead of its Feb. 5 DVD release, the underdog film “Gosnell: The Trial of America’s Biggest Serial Killer” is seeing success as it reaches No. 1 on Amazon’s best-sellers list in “drama DVDs.”

“We have seen this all along,” said Phelim McAleer, the film’s producer, in a statement to The Daily Signal. “‘Gosnell’ is the movie that the mainstream media and Hollywood don’t want you to see, but the public really has an appetite for the truth.”

Unlike mainstream studios, “Gosnell,” which tells the story of the infamous late-term abortionist Kermit Gosnell, was supported by a crowdfunding campaign that raised a record-breaking $2.3 million in 45 days.

Released in nearly 800 theaters across the U.S. in October, “Gosnell” grossed $3.6 million despite the lack of support from mainstream media outlets.

“The film has been suppressed—NPR and Facebook and The New York Times have shut down our advertising,” said McAleer. “They won’t take our money because they don’t want this story told because it shines a negative spotlight on abortion.”

The movie depicts the controversial investigation, trial, and conviction of “America’s most prolific serial killer,” as described by ABC News, and the political establishment media’s efforts to brush Gosnell’s sordid medical history under the rug.

Gosnell is currently serving three life sentences for murdering three children and killing a female patient. This ended his 30-year career of performing abortions in his Philadelphia clinic.

The release date of the “Gosnell” DVD is currently scheduled for Feb. 5. It is also available on major Video on Demand outlets such as Dish, Direct TV, Google Play, iTunes, and Amazon.