Trump’s State of the Union Options 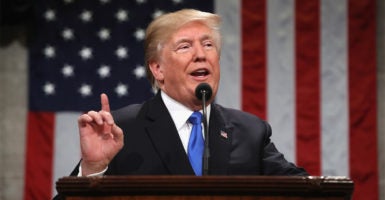 President Donald Trump gestures during the State of the Union address in the U.S. House of Representatives on Jan. 30, 2018. (Photo: Win McNamee /AFP/Getty Images)

House Speaker Nancy Pelosi has given President Donald Trump an opportunity to change the dynamic of the State of the Union address, an event that has become predictable and often boring. It has featured members of Congress popping up and down like whack-a-moles, interrupting the president with applause if they agree with him, or stone silence if they don’t.

Pelosi claims that because of the partial government shutdown, the security of the U.S. Capitol cannot be guaranteed. The Department of Homeland Security debunked her claim, saying that the Secret Service and Capitol Police will perform their duties whether or not they are receiving paychecks.

Trump might consider reverting to the pattern of previous presidents, sending his address to Congress in writing. Then he might deliver the speech from the Oval Office, or at one of his rallies instead of in the Capitol Building.

Democrats wouldn’t be able to instantly respond on television, as they did following the president’s border wall speech, and even if they did, they would likely look as small as Pelosi and Senate Minority Leader Chuck Schumer, D-N.Y., did then.

The truth is that the economic state of the union is good. According to Labor Department data, more people than ever are working and unemployment figures, especially in the African-American and Hispanic communities, are at record, or near record, lows. The stock market, after a recent decline, has rebounded, for which retirees are no doubt grateful.

Unfortunately, the political state of the country is anything but unified; not even close. For decades the media and their Democrat allies have blamed Republicans for dividing the country when they stand on their principles, only praising members of the GOP when they submit to Democrat demands.

The Constitution requires a president to deliver an annual assessment of the state of the union. George Washington delivered the first one before Congress on Jan. 8, 1790, in New York City, which was the new nation’s provisional capital. In 1801, Thomas Jefferson, believing an in-person address would have made him look like a king appearing before his subjects, set the precedent of writing his State of the Union address and having it delivered to Congress by a clerk.

Woodrow Wilson re-established the practice of an in-person speech, but the practice was not consistent even during the latter part of the 20th century. Jimmy Carter delivered a written report in January 1981, shortly before Ronald Reagan was inaugurated. Every president since has delivered a State of the Union address before Congress with Reagan adding a twist, the recognition of balcony guests he and his successors wished to honor.

When radio and especially television offered an opportunity for presidents to be heard and later seen, most have delivered their remarks in person. The House of Representatives offers an impressive backdrop, but shots of some members of Congress smirking, texting, and otherwise not paying much attention do not demonstrate the respect the speech deserves.

Most people who pay attention to the childish and partisan behavior that characterizes Washington these days can do their own assessment of the state of the union. If they have jobs and are prospering, they probably think it is pretty good—the pettiness in Washington notwithstanding.

Should Trump decide to do an alternative report, either in writing, or from the White House, or even a retro address on radio, he is likely to get more attention than he would receive from delivering it in person.

He could also go ahead with a speech in the House of Representatives and by doing so challenge Democrats and Pelosi’s claims of insufficient security. Maybe Pelosi and Schumer would boycott the speech; it would certainly appeal to their liberal base. It would also demonstrate who the real culprits are when it comes to the country’s disunity.