I Went to the March for Life. Here Are 7 Things I Saw. 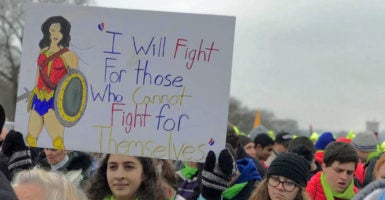 Tens of thousands of pro-life activists from across the country gathered Friday in Washington to speak out against abortion by participating in the 46th annual March for Life.

A massive crowd–made up of many high school and college students but also families, older Americans, and clergy—gathered on the National Mall for the rally that preceded the event before making their way along Constitution Avenue to the Supreme Court.

Notable conservative leaders and influencers who addressed attendees included Ben Shapiro, host of “The Ben Shapiro Show” and editor-in-chief of The Daily Wire.

I checked out the event for The Daily Signal, observing and talking with participants during my 13th year attending the march. Here are seven things I noticed:

1. A Thankfulness for Lives Spared

Kate Meldrum from Greenville, Indiana, said she attended the march this year because she could have lost her sister to abortion.

“I am here today to march for the unborn,” Meldrum said. “And when I was younger, my little sister Iris was born, and she had some birth defects, and they told my parents it would be a good idea to abort her.”

“And now she is fine, and she is my favorite little sister. So that’s why I march today.”

It’s so secret that abortion rights groups such as Planned Parenthood and the Women’s March have tried to monopolize the color pink in their branding to advocate abortion on demand.

Nathan Berning, of Fort Wayne, Indiana, said he and friends were at the march to “take pink back” with their pink pro-life wristbands.

“That’s our campaign,” Berning said. “Let Them Live is the organization that we founded. Basically the whole mission is to take pink back and save lives from abortion.”

Susanna Edwards of Delta, Pennsylvania, dressed in a skirt made with baby onesies.

Edwards said she was marching “because I believe that all human lives have value and I believe that if we would stir up affection for the unborn, it would fuel us to protect them.”

4. An Absence of Profanity and Offensive Language

That was one thing I did not see at the March for Life.

In stark contrast, there were no signs using the f-word and the p-word.

Lohberger said she attended the March for Life with her husband.

They are part of Save the Storks, a pro-life organization that works with pregnancy care centers and employs medical mobile units across the country to provide alternatives to abortion.

6. An Atmosphere of Joy, Not Hate

One young man from Virginia who declined to give his name said the contrast he sees between the March for Life and other “civil rights” marches is stark.

“At the Women’s March and immigration protests, nobody is having fun and everybody is angry,” he said. “Here at the March for Life, everyone is happy and having a good time.”

7. Love for Moms and Babies

Oftentimes, the pro-life movement is characterized as advocating only for babies, without any care or concern for mothers.

At the March for Life, that characterization was shown to be clearly false.

“I love the value of life, and you hear so many stories about people not being able to get pregnant, or having to adopt,” said a woman who gave her name only as Amber.

“We always think of that as a second option,” she said, “but really, life is the first option, and preserving the life of everyone and every human being.”