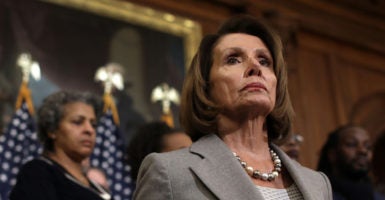 House Speaker Nancy Pelosi, D-Calif., asked the president to delay his State of the Union address in the House of Representatives. (Photo: Win McNamee/Staff/Getty Images)

Mike Howell is a senior advisor for executive branch relations at The Heritage Foundation.

We expected all sorts of fits and furies when Democrats took control of the House, but Speaker Nancy Pelosi’s unprecedented threat to disinvite President Donald Trump to the State of the Union sets the bar surprisingly low.

And it makes Trump’s cancellation of her overseas trip all the more sweet.

On Wednesday, citing disingenuous security concerns, Pelosi sent the president the formal equivalent of a lunchtime high school bully’s “you can’t sit with us anymore.”

The irony of the speaker holding up government funding over border security while simultaneously decrying the lack of security for the speech was apparently lost on CNN, who praised Pelosi’s gambit as “a major power move.”

Pelosi fails to recognize that in a partial shutdown, essential services remain. Protecting the State of the Union is an essential function, and its execution would be unaffected by the partial lapse in appropriations funding.

Soon after the ink from Pelosi’s letter was dry, Homeland Security Secretary Kirstjen Nielsen corrected Pelosi by stating that “the Department of Homeland Security and the U.S. Secret Service are fully prepared to support and secure the State of the Union.”

Furthermore, Pelosi commands a Capitol Police force with a near half-billion-dollar annual budget. The Capitol Police would play the largest role in securing the event and are completely unaffected by the current lapse in appropriations funding. In fact, Pelosi’s security detail was able to seamlessly accompany her to Hawaii during her vacation in the early days of the shutdown.

In falsely citing—without evidence—security as the reason for the disinvitation, Pelosi failed to address what changed from when she initially invited the president two weeks ago, when the government was in the same funding predicament.

Perhaps with the weakening of her position, and a reminder that Trump’s 2018 speech garnered almost 50 million viewers, she decided to do all she could to deny her political opponent the opportunity to continue to make the case for border security.

That may be why she changed her tune on Thursday, citing federal paychecks—not security per se—as her reason for potentially disinviting the president.

Regardless of the merits of her reasons, she does retain the authority to not host the president. But withdrawing the invite would only reinforce public perceptions of Congress and its abysmal approval rating.

The president can also give his address—which is constitutionally obligated—at another place of his choosing. Perhaps he should consider somewhere Democrats would want to go during this partial lapse in appropriations: like a nice beach in Puerto Rico.