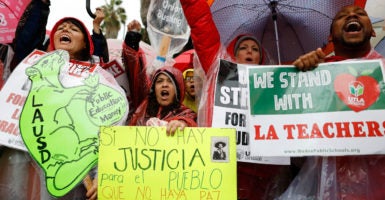 Public school teachers in Los Angeles are on strike, affecting half a million children attending some 900 public schools in the district.

Although students in the Los Angeles Unified School District—the second-largest school district in the country—can still access the schools, classes are being taught by substitute teachers while teachers outside are striking.

Many students are staying home—leaving some parents scrambling for child care.

Students who are going to school during the strike are passing the day playing games on iPads. Missing school or being relegated to busy work as a result of public education employee strikes are critical learning days lost.

Among the striking teachers’ demands are increased pay and smaller class sizes, along with regulations on charter schools and a push to increase the number of nonteaching personnel, such as librarians and counselors.

Yet since 1992, nonteaching staff in California has increased nearly 50 percent, greatly outpacing the 24 percent increase in the number of students.

As economist Ben Scafidi of Kennesaw State University in Georgia found, had California just kept the nonteaching staff levels on par with increases in student enrollment, the state would have saved nearly $3 billion—which could have gone toward unfunded pension liabilities.

The state’s unfunded pension liability—the gap between benefits owed and funding available for that purpose—was $107 billion in 2018.

The increase in nonteaching personnel only exacerbates existing spending issues in the district.

As Chad Aldeman points out, from 2001 to 2016, the Los Angeles Unified School District increased overall spending by more than 55 percent. Public employee benefits in the district increased 138 percent.

First, Butcher notes, strikes are hard on families, and send parents scrambling. Strikes can test parents’ patience, even when they support the demands of the strikers.

Second, it’s school districts, rather than state lawmakers, who are ultimately responsible for teacher salaries. Third, tax increases on California taxpayers will not necessarily lead to increased teachers’ salaries.

Ultimately, school districts should be transparent in their spending, making administrators’ salaries publicly available, and they should reduce—not increase—the number of nonteaching personnel.

Furthermore, they should reward excellent teachers by basing teachers’ compensation on job performance.

During the strike, more than 117,000 students in Los Angeles are still able to attend school without being affected by the walkouts; namely, those in charter schools.

So, most critically, parents should be empowered with choice, including more charter school options and private school choice options.

Increasing spending and the number of nonteaching personnel, and further regulating education choice options, such as charter schools, will only amplify a failed status quo in California.

Instead, California should immediately empower families to choose learning options that are effective and meet their needs by moving toward increased school choice opportunities.