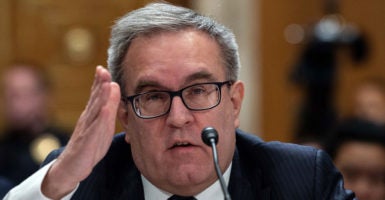 Andrew Wheeler, nominee to be administrator of the Environmental Protection Agency, testifies Wednesday during his confirmation hearing before the Senate Environment and Public Works Committee. (Photo: Nicholas Kamm/AFP/Getty Images)

America is “the gold standard for environmental progress,” Andrew Wheeler, the president’s nominee to head the Environmental Protection Agency, told a Senate committee Wednesday during his confirmation hearing.

Committee Democrats, while accusing him of favoring the fossil fuel industry, avoided personal attacks on Wheeler, who took over as acting EPA administrator after Scott Pruitt’s resignation in July under partisan fire.

Wheeler highlighted the Trump administration’s regulatory reform agenda and its goals in an opening statement to the Senate Committee on Environment and Public Works.

“Through our deregulatory actions, the Trump administration has proven that burdensome federal regulations are not necessary to drive environmental progress,” he said. “Certainty and the innovation that thrives in a climate of certainty are key to progress.”

Democrats on the committee, however, said Wheeler is biased toward producers of coal and other fossil fuels and ignored the need to protect the environment and for “urgent action” to prevent catastrophic climate change.

They asked Wheeler, 54, to offer his opinion on the recent findings of the National Climate Assessment, an interagency government report, and the U.N.’s Intergovernmental Panel on Climate Change.

Democrats also pressed Wheeler on his relationship with the coal industry and took the opportunity to comment on the partial government shutdown and its impact on the EPA’s ability to perform vital functions.

Committee Republicans credited Wheeler with working to “provide greater regulatory certainty” while upholding environmental standards. They cited his long record of public service, including work he previously did for the committee.

Wheeler, Pruitt’s deputy, assumed his responsibility for implementing key parts of Trump’s regulatory reform agenda. These included ending the practice of “sue and settle” and rolling back restrictions on the private sector that the administration viewed as costly and duplicative.

The Senate confirmed Wheeler to serve as deputy EPA administrator in April 2018, and this marked his second confirmation hearing in 14 months.

Prior to rejoining the agency, the Ohio native was Republican staff director for the same Senate committee.

A lawyer who was an Eagle Scout, Wheeler began his public career in the administration of President George H.W. Bush as a special assistant in the EPA’s Office of Pollution Prevention and Toxics.

Wheeler worked as a lobbyist for Murray Energy, a coal mining company based in Ohio. Robert E. Murray, the company’s founder and chief executive officer, is a prominent supporter of Trump and his name also came up.

Sen. Thomas Carper of Delaware, the panel’s ranking Democrat, set the tone with an opening statement in which he favorably compared Wheeler with his predecessor while objecting to Wheeler’s policy stances.

“Mr. Wheeler is certainly not the ethically bereft embarrassment that Scott Pruitt proved to be and—to be fair—he has engaged more frequently and substantively than Scott Pruitt with both Congress and EPA career staff,” Carper said, adding:

I knew that Mr. Wheeler and I would not always agree. But I hoped that he would moderate some of Scott Pruitt’s most environmentally destructive policies, specifically where industry and the environmental community are in agreement. Regrettably, my hopes have not been realized.

In fact, upon examination, Mr. Wheeler’s environmental policies appear to be just as extreme as his predecessor’s, despite the promises that Mr. Wheeler made when he first appeared before our committee.

Later in the hearing, Sen. Edward Markey, D-Mass., criticized Wheeler for describing concerns over climate change as an “issue” instead of a “crisis.”

“I think you are 100 percent wrong,” Markey told Wheeler. “We are having a climate crisis.”

Markey cited last fall’s National Climate Assessment, which draws from the EPA and 12 other federal agencies, to bolster his point. He also criticized Trump’s response to the report.

Markey: “How did President Trump respond when asked about the conclusion of the National Climate Assessment … ? He said, ‘I don’t believe it.’ Do you agree with Donald Trump?”

Wheeler: “I believe that President Trump was referring to the media reports of the assessment itself, and I question the media reports as well because they focused on the worst-case scenario and they also focused on one study that was not actually in the report. And that’s the study that said there would be a 10 percent hit to the GDP [without strong government action].”

In the run-up to the hearing, some committee Democrats criticized Wheeler for making use of EPA staff to prepare amid the partial government shutdown, which began Dec. 22.

In a letter to the EPA, they expressed concern that Wheeler was operating in violation of a U.S. law that prohibits executive branch agencies from spending money or incurring obligations outside those provided by Congress or federal law.

Carper, among the Democrats to sign the letter, commented on how the shutdown affects federal workers and the public.

Superfund sites are not being cleaned up. The safety of new chemicals is not being assessed. Public meetings are being cancelled. Just as important, 14,000 furloughed EPA employees are unsure if they will be able to afford their mortgages, day care providers, or grocery and electricity bills. Some of those furloughed employees appear to have been asked to help prepare for this very hearing …

In his opening remarks, Wheeler noted that the EPA “deleted all or part of 22 [Superfund] sites from the National Priorities List” in fiscal 2018, calling it the “largest number of deletions in one year” since fiscal 2005.

“And we are in the process of cleaning up some of the nation’s largest, most complex sites and returning them to productive use,” he added.

Sen. James Inhofe, R-Okla., a leading skeptic of climate change, sought to set the record straight on the trend of carbon dioxide emissions in the U.S.

The Oklahoma Republican cited an article from Forbes that said carbon dioxide emissions are still down 11 percent since 2005 and that the recent uptick can be attributed to robust economic growth. Inhofe invited Wheeler to comment.

“Our CO2 emissions peaked in 2005 and it’s been on a decline since then,” Wheeler said. “We believe, and I was just briefed on this by my career staff, that we are going to continue to see a decline in CO2 emissions.”

“We had an uptick in manufacturing and industrial output that brought our CO2 emissions up slightly,” he added, “but overall we don’t expect that to continue. The downward trend is going to continue in the long term.”

Whitehouse asked Wheeler about his relationship with Murray, the coal industry executive who owns and operates Murray Energy. He focused on an “action plan” Murray had presented to the Trump administration.

“You have your thumb, wrist, forearm, and elbow on the scales in virtually every determination that you can in favor of the fossil fuel industry, and I think that is very unfortunate,” Whitehouse told Wheeler.

“We learned by published reports that on March 29, 2017, you attended a meeting between your client Bob Murray and Energy Secretary Rick Perry where this action plan was discussed.”

Whitehouse presented photos of the meeting, saying the “action plan” was in the room. He said the plan also was given to Pruitt and to Vice President Mike Pence.

At the time, Murray was a client of the lobbying firm where Wheeler worked.

Whitehouse: “Can you tell me now how many meetings with Trump administration officials for Bob Murray did you arrange, attempt to arrange, or attend, and with whom?”

Wheeler: “I didn’t try to arrange the meeting with Scott Pruitt. Someone else at my firm did that. The purpose of that meeting was talking about the relief … ”

Whitehouse, interrupting: “My question was quite specific, how many meetings with Trump administration officials did you arrange or attend for Mr. Murray?”

Wheeler: “The meeting with Secretary Perry, and then I believe we had an additional meeting at the White House. … But I did not arrange or attempt to arrange … ”

Whitehouse interrupted again, saying he would continue to pursue this line of questioning in writing.

Sanders: “President Trump has indicated his belief that climate change is a hoax. … Do you agree?”

Wheeler: “I believe climate change is real and that man has an impact on it.”

Sanders: “The president has said that climate change is a hoax. Do you agree with him?”

Wheeler: “I have not used the hoax word myself.”

Sanders also expressed dismay that Wheeler did not refer to climate change in his opening statement.

Booker asked Wheeler about his views on the U.N.’s climate change report as well as the U.S. government assessment, highlighting dire forecasts in both documents.

“There’s this urgency to move as quickly as possible,” Booker said. “We face growing challenges not just now, but really over the next 25 years. … Why are you pulling back on regulations that will ultimately help us to deal with what our climate scientists say we need to do to reduce greenhouse gas emissions?”

In response, Wheeler said he and his team are “moving forward on a proactive basis” to further reduce carbon dioxide emissions.

He cited the Affordable Clean Energy Rule, which replaced the Obama administration’s Clean Power Plan, as a key component of ongoing efforts.

Acting Administrator Wheeler has led efforts to issue commonsense regulatory proposals like the Affordable Clean Energy Rule and the revised definition of ‘Waters of the United States’; implement this committee’s 2016 bipartisan reform of the Toxic Substances Control Act in an effective and efficient manner; reduce lead exposure, including through the Federal Lead Action Plan; provide greater regulatory certainty to states, to tribes, localities, and to the regulated community; and improve enforcement and compliance assistance.