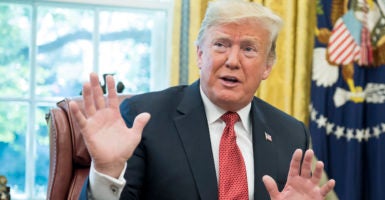 Greenhouse gas emissions have declined across multiple sectors since President Donald Trump has been in office, the Environmental Protection Agency announced.

These achievements flow largely from technological breakthroughs in the private sector, not the heavy hand of government. The Trump administration has proven that federal regulations are not necessary to drive CO2 reductions. While many around the world are talking about reducing greenhouse gases, the U.S. continues to deliver, and today’s report is further evidence of our action-oriented approach.

More than 8,000 facilities submitted data to the agency’s program for the 2017 reporting year.

Greenhouse gases that the EPA says trap heat in the atmosphere include carbon dioxide, methane, nitrous oxide, and fluorinated gases. But it is the carbon dioxide emissions that stand out.

The Trump administration anticipates that carbon dioxide emissions from the U.S. power sector will continue to decline if the government implements its proposed Affordable Clean Energy Rule.

The Trump rule would replace the Obama administration’s “Clean Power Plan” with guidelines that give states more flexibility to determine how to reduce greenhouse gas emissions from coal-fired power plants.

“Much of the world ridiculed the Trump administration for withdrawing from the Paris Accord [on addressing climate change] and rolling back the previous administration’s climate regulations,” Nick Loris, an energy policy analyst for The Heritage Foundation, said in an email, adding:

But they’re not singing our praises as market-driven innovations lead the world in reducing emissions, while they fail to meet their nonbinding commitments under Paris. It’s clear that talking the talk and walking the walk are two very different things.

Wheeler has described the Obama administration plan as a “top-down, one-size-fits-all” approach to energy policy.

In February 2016, the Supreme Court ordered a halt in enforcement of the Clean Power Plan until a lower federal court ruled on its legality.

That order—which came in response to legal challenges from 27 states, 24 trade associations, 37 rural electric co-ops, and three labor unions—marked the first time the high court had stopped a regulation before a lower appeals court issued a final judgment.

The EPA projects that the Trump proposal would lead to a decrease in carbon dioxide emissions of 35 percent below 2005 levels.

The agency will hold a webinar Oct. 24 to demonstrate a data publication tool on greenhouse gases called FLIGHT.