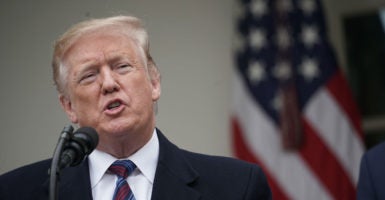 President Donald Trump celebrated low unemployment numbers for veterans Tuesday on Twitter while simultaneously taking a jab at the media.

“Just announced that Veterans unemployment has reached an 18 year low, really good news for our Vets and their families,” Trump wrote. “Will soon be an all time low!”

The president appears to be referencing recent media reports, including one from the Military Times, which cites data from the Bureau of Labor Statistics and claims that “unemployment among post-9/11 veterans is the lowest it’s ever been.”

December 2018 saw an even lower unemployment rate of 3.2 percent.

Just announced that Veterans unemployment has reached an 18 year low, really good news for our Vets and their families. Will soon be an all time low! Do you think the media will report on this and all of the other great economic news?

Trump also took the chance to question whether the media would report on the numbers, given that it’s “good news.”

“Do you think the media will report on this and all of the other great economic news?” Trump asked.

Trump subsequently cheered that Volkswagen will be spending $800 million to expand a factory in Chattanooga, Tennessee.

“They will be making Electric Cars. Congratulations to Chattanooga and Tennessee on a job well done. A big win!”