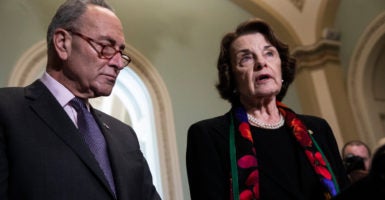 The firearms banned under Sen. Dianne Feinstein’s bill are not military-grade at all, even if they mimic military appearances. Pictured: Senate Minority Leader Chuck Schumer, D-N.Y., and Feinstein hold a press conference on Oct. 4, 2018. (Photo: Drew Angerer/Getty Images)

Democrats promised that if they retook control of the House, gun control would be a top priority. They have wasted little time in seeking to restrict the rights of law-abiding citizens to keep and bear arms.

The bill would prohibit the future sale, transfer, manufacture, and importation of “military-style assault weapons” and “high-capacity” magazines—in other words, it would keep law-abiding Americans from buying many of the most popular firearms used for hunting, shooting sports, and self-defense.

The bill appears to be similar to ineffective legislation passed in 1994, in California and in Canada. If passed, it would have the same ineffective results.

The bill’s text is not yet available to the public, but the senators’ press release indicates that the bill would prohibit, among other things, the purchase or transfer of:

And while the tens of millions of Americans who already own these firearms would have them “grandfathered in,” the bill would require the guns to be kept with a trigger lock or in some form of “secure storage” when not in use.

Finally, the bill apparently would exempt 2,200 guns for “hunting, household defense, or recreational purposes.” It is unclear which types of guns would be exempted or why, but given the bill’s purpose and the rhetoric surrounding certain firearms, it’s unlikely that the exemptions would include the most popular “assault weapons,” such as the AR-15 or full-size Glock handguns.

Fallacies of the Ban

If the press release is any indication, Feinstein’s bill is premised largely on anti-gun rhetoric and isn’t based on facts. It uses purposefully misleading terminology and focuses on the firearms least likely to be involved in firearm-related deaths.

Most importantly, it uses a framework that has already failed to save lives in the United States.

1.) Misleading terminology:  The title of the bill itself uses language that has no technical value, but is intended solely as a scare tactic.

There’s no such thing as an “assault weapon,” and the use of the term is intended to associate these commonly used semi-automatic firearms with “assault rifles,” which have long been heavily regulated by the Bureau of Alcohol, Tobacco, Firearms and Explosives and are not commonly owned by civilians.

Actual assault rifles are military-grade, fully automatic firearms. In fact, the term “assault rifle” is a military term, and is defined by the U.S. military to mean a compact weapon capable of selective fire and utilizing an intermediate-power cartridge.

In other words, an “assault rifle” can fire in fully automatic, burst, and semi-automatic modes, and uses a bullet caliber higher than that of a typical handgun.

But the firearms banned under Feinstein’s bill are not military-grade at all, even if they mimic military appearances. While the popular AR-15 may fire an intermediate-power cartridge, it is a civilian gun that cannot fire in burst or fully automatic modes.

Further, many “AR-15-style” rifles prohibited by the bill can be purchased in lower calibers that are no more lethal than a handgun—a fact the bill does not take into account when defining “assault weapon.”

Instead of focusing on lethality, the bill focuses on cosmetic features. Ironically, this means that law-abiding civilians will be stripped of the very features that enable them to fire safely and more accurately.

A pistol grip, for example, helps inexperienced or smaller shooters maintain a more stable base—something of vital importance when making a life-or-death shot.

2.) It doesn’t address real problems: The fact of the matter is that banning future sales of “scary-looking” guns won’t save lives. Simply put, semi-automatic rifles and factory-standard magazines holding more than 10 rounds are not the problem.

3.) It doesn’t work in states that already have it: If those numbers aren’t enough, similar “assault weapon” bans have failed to prevent mass public shootings in places where they already exist.

California has long prohibited the purchase and possession of these firearms, and yet experiences a higher ratio of mass public shootings relative to its population than do other, less gun-restrictive states.

Finally, the United States already tried Feinstein’s solution with the 1994 federal assault weapons ban, which expired in 2004 and on which her current bill is based.

The official assessment of the ban was less than glowing, noting that the relative rarity of deaths involving these types of firearms made it impossible to attribute lower firearm-related crime rates or homicide rates to the ban.

How to Actually Save Lives

Gun violence is a serious problem, and just because Feinstein’s bill doesn’t offer an effective solution doesn’t mean solutions don’t exist. So, what can policymakers do without broadly infringing on the rights of law-abiding citizens?

The worst part of Feinstein’s bill isn’t that it picks an unnecessary fight with law-abiding gun owners or demonizes the firearms least likely to be involved in crime. It’s that this unnecessary fight turns the public focus away from actual solutions to very real problems. In the meantime, lives will continue to be lost.