The Misinformed, Ineffective War on Styrofoam Heads to Hawaii 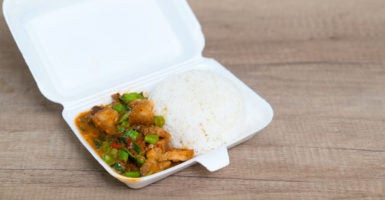 Oahu's ban on Styrofoam food containers will likely result in higher prices for small businesses and consumers, but not a reduction in litter, according to a recent study. (Photo: Witthaya Prasongsin/Getty Images)

Maui on Dec. 31 became the first Hawaiian county—and one of the latest cities and counties across the United States—to ban polystyrene plastic (more commonly known as Styrofoam) food containers.

The purpose of the ban is to reduce pollution and encourage recycling across the island.

Yet, a recent report on the impact of a proposed Styrofoam ban in Oahu, another island to the north of Maui, suggests that a Styrofoam ban is unlikely to reduce litter and increase recycling in any part of Hawaii.

The new Maui ordinance prohibits food vendors or providers—defined as “any entity or person providing prepared food for consumption within the county”—from using single-use Styrofoam containers to package prepared food. Violators of the ordinance are subject to criminal punishment and monetary fines.

Environmentalist groups are thrilled about the new law and claim it will reduce pollution in the Pacific Ocean, as businesses will now serve food in environmentally friendly food containers.

Understandably, Hawaiians have an interest in protecting their environment. The state’s beautiful beaches and landscapes make it a hot spot for tourism—an industry that accounts for approximately 21 percent of the state’s economy.

But according to the Oahu study above, Hawaii does not recycle or compost single-use food containers of any kind, even if the containers are made of recyclable material.

Instead, the Hawaiian Department of Environmental Services collects and burns all single-use food containers once they are discarded.

Even if the state did recycle, the study noted, litter and pollution likely still would be a problem.

The report cited California as a glaring example.

The Oahu study further found that a ban on Styrofoam food containers could also economically harm food providers and consumers of takeout food.

Recyclable food containers are more expensive than nonbiodegradable products like Styrofoam. Higher manufacturing costs will increase the prices that retail food providers pay for the containers, which they will pass onto consumers through higher takeout menu prices.

The Oahu study concluded that the more likely impact of a Styrofoam food container ban, similar to Maui’s, is higher prices for small businesses and consumers, and not a reduction in litter and pollution.

Maui’s Styrofoam food container ban is part of a growing trend across America led by liberal and progressive politicians to ban plastic-based food service products as part of a misinformed effort to “save the planet.”

Supporters of these policies claim that such bans are necessary to prevent further pollution of, and destruction to, the environment.

Yet, there is little evidence that any of these bans—plastic straw bans, plastic bag bans, Styrofoam food container bans, et al.—are having or will have any positive effect on the environment.

At least one study has suggested that policies banning plastics can even cause serious harm.

San Francisco, for example, was one of the earliest adopters of these policies in 2007, when it prohibited all retail stores from using single-use plastic bags.

In 2014, Jonathan Klick and Joshua Wright, who are both law professors and Ph.D. economists, conducted a study of the effects of the San Francisco plastic bag ban. They found that as soon as the ban went into effect, deaths and emergency room visits related to foodborne illnesses from bacteria such as E. coli spiked in San Francisco, with deaths increasing as much as 50 percent to 100 percent, relative to other counties in California.

Why the spike in foodborne illnesses?

Klick and Wright concluded that non-plastic reusable shopping bags were the likely culprit, which consumers were forced to use once San Francisco banned plastic bags.

As they explained in the study, reusable shopping bags, such as cloth bags commonly used as alternatives to plastic bags, can be incubators for bacteria.

Harmful and even deadly bacteria will begin to grow inside reusable shopping bags if they are not thoroughly and consistently cleaned, turning those environmentally friendly totes into giant petri dishes.

Those who then use the contaminated bags to carry or transport food significantly increase their risk of contracting a foodborne illness.

Remarkably, that study has not stopped California from waging a senseless war on plastic. And other progressive states are following right behind the Golden State.

Hawaii, are you going to be next?