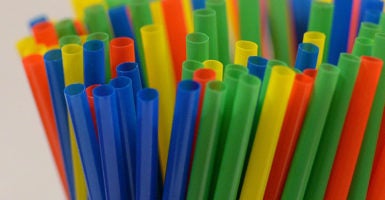 Waiters could face criminal penalties for giving straws to customers if a recently proposed California bill goes into effect.

California Assemblyman Ian Calderon, the Democratic majority leader of the state Assembly, has introduced a bill into the state’s lower House that would make it a criminal offense for restaurant employees to provide patrons with single-use plastic straws unless a patron specifically requests one. The measure would only apply to sit-down restaurants, and not fast food or similar locations.

Each such action would constitute a misdemeanor, punishable by up to six months in jail and a $1,000 fine.

Calderon argued in a press release that this bill was not meant to ban straws entirely, but constitutes a “small step towards curbing our reliance on these convenience products, which will hopefully contribute to a change in consumer attitudes and usage.”

As Christian Britschgi of Reason points out, this bill would not be the state’s first foray into banning single-use straws—the cities of San Luis Obispo, Davis, and Manhattan Beach all have city ordinances prohibiting their use in one capacity or another.

Calderon’s bill, however, would be the first of its kind to impose criminal liability on restaurants and their employees.

The movement to reduce the use of plastic straws has received considerable support in California, with none other than the Los Angeles Times and celebrity astronomer Neil deGrasse Tyson endorsing “straws-on-request” policies.

Proponents of these prohibitions claim that Americans use 500 million plastic straws a day, many of which end up harming fragile ecosystems when they find their way into waterways and oceans.

The Environmental Center of San Luis Obispo reported that the county’s 2017 Coastal Cleanup Day resulted in over 1,300 straws being collected from local beaches, while the California Coastal Commission has seen its annual Coastal Cleanup Day collect over 835,400 straws since 1988.

However, the validity of the “500 million straws a day” estimate is questionable. According to the National Park Service, the number comes from a recycling company named Eco-Cycle, which in turn credits the research of Milo Cress. Cress arrived at this number after conducting phone surveys of straw manufacturers in 2011—when he was just 9 years old.

Even operating under the assumption that the number of straws used is verifiable (a rather large assumption), there is absolutely no need to use criminal sanctions as a means of solving the “straw problem.”

As it currently stands, California has more than 5,000 separate provisions in its criminal code, “covering almost every conceivable form of human misbehavior.”

This problem was highlighted by Gov. Jerry Brown, who vetoed nine bills in 2015 that would have otherwise created even more criminal offenses for Californians.

The addition of criminal sanctions for something as benign as giving straws to customers seems particularly counterintuitive in a state that has spent the last few years attempting to significantly decrease its incarceration rates.

Attempts like this to hang prison sentences over the heads of average citizens for comparatively harmless actions are emblematic of an epidemic faced by the country as a whole—overcriminalization.

At the federal level alone, there are over 4,450 offenses listed in Title 18, which is the criminal section of the U.S. Code. This does not include the uncountable number of obscure agency regulations for which a person can face potential criminal penalties, even if they had no reason to know they were violating the regulation.

The desire to protect the environment and encourage the consumption of fewer single-use straws is certainly laudable, and Americans should continue striving to find ways to be better stewards of the earth.

Threatening waiters with jail time over taking a typical customer service initiative, thereby increasing the odds that more Californians will be fined or imprisoned over actions that are not inherently immoral, is simply not a very efficient way of protecting either the environment or the citizens of California.