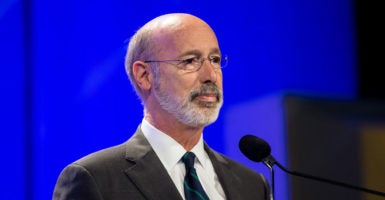 Pennsylvania Gov. Tom Wolf issued an executive order that commits the state to the goals of reducing greenhouse gas emissions by 26 percent by 2025 and 80 percent by 2050. (Photo: Gilbert Carrasquillo/Getty Images)

When then-candidate Donald Trump surprised many observers by winning Pennsylvania in the 2016 election, some ascribed the victory to his relentless campaigning in support of the state’s traditional energy sector, particularly coal and natural gas.

In that campaign and his later decision to withdraw the U.S. from the Paris climate agreement, many saw the president taking the side of the energy sector against efforts to reduce greenhouse gas emissions.

Now Democratic Gov. Tom Wolf, safely elected to a second term, has come down firmly on the side of anti-greenhouse gas efforts. The governor issued an executive order Tuesday that commits the state to the goals of reducing greenhouse gas emissions by 26 percent by 2025—just six years from now—and 80 percent by 2050.

The order also calls for the formation of a new body that will direct efforts aimed at reducing state government entities’ energy consumption by 21 percent by 2025.

“The GreenGov Council will serve as a central coordinating body to promote the implementation of the executive order and the achievement of the … state agency performance goals,” a news release announcing the order stated.

The state will be required to replace 25 percent of its passenger car fleet with all-electric and plug-in hybrid vehicles by 2025, and 40 percent of the state’s annual energy usage must be offset by renewable sources.

“Commonwealth agencies can continue to demonstrate their commitment to both environmental and fiscal stewardship by implementing best practices to reduce energy and resource consumption, improve energy efficiency, realize cost savings, and protect the environment,” Wolf said.

Wolf’s press secretary, J.J. Abbott, noted later Tuesday on Twitter that the state’s goals imposed by the executive order were in line with the guidelines of the Paris climate agreement.

The issuance of the executive order was timed to coincide with a news conference in Pittsburgh where Peoples Gas revealed a partnership with the Environmental Defense Fund and Google Earth Outreach to study the company’s infrastructure and find ways to dramatically decrease the release of methane into the atmosphere.

“Leaks will be mapped throughout 2019 using a laser-based methane analyzer installed on a Peoples survey vehicle,” the Environmental Defense Fund said in a news release. “With that information, scientists at [Colorado State University] will use a peer-reviewed algorithm to quantify the volume of methane emissions from each leak so that Peoples can focus their system upgrades on the largest leaks and those where investment brings the greatest safety and environmental benefit.”

The governor’s action Tuesday drew at least some criticism within the environmental community as insufficient to truly address climate change.

“Pennsylvania can do so much more to combat the climate crisis by moving our state to 100 [percent] renewable energy by 2035 while creating hundreds of thousands of jobs in a Green New Deal program,” Food & Water Watch Pennsylvania Director Sam Bernhardt said in a statement. “Governor Wolf, the people of Pennsylvania and future generations deserve a much more aggressive approach to combating the existential crisis of our time.”

The National Resources Defense Council, on the other hand, was effusive in its praise of Wolf’s executive order.

“Gov. Wolf is yet again taking up the mantle of leadership to fight climate change,” the National Resources Defense Council’s Jackson Morris said. “His bold agenda is the first in state history to slash greenhouse gas emissions and align with the Paris Agreement, capture new clean energy growth in electric vehicles, and put Pennsylvanians to work while leading the way forward for a clean energy future.”

In an interview Tuesday with radio station KDKA in Pittsburgh, Wolf argued that taking action on climate change is something Pennsylvanians should see as essential in the aftermath of recent flooding in various parts of the state.

“This is not something that is meant to be an abstraction,” he said. “All over the state this past year, we’ve had unusual weather. I mean, here Route 30 collapsed. We’ve had floods in York County, Schuylkill County, Bradford County, Philadelphia County, as well as Allegheny County. So something weird is going on out there.”

Dave Lemery is the Pennsylvania and New Hampshire news editor for Watchdog.org. Contact Dave at dlemery@watchdog.org.