‘Heck of an Honorable Guy’: What Democrats Thought of Trump’s AG Nominee 28 Years Ago 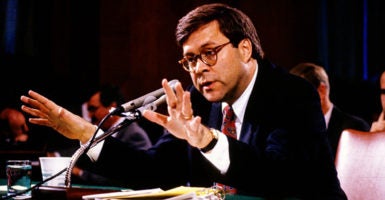 Despite a polarized political environment, Joe Biden calls the Republican president’s nominee to be attorney general, William Barr, a “heck of an honorable guy.”

This is shortly after a slugfest over a Supreme Court confirmation, and in the midst of a prosecutor’s yearslong investigation of the GOP president’s administration.

That Republican president was George H.W. Bush in 1991, when Biden was the Democrat chairing the Senate Judiciary Committee.

After the Democrat-controlled Senate confirmed Barr as attorney general by voice vote, he served until the end of the Bush administration in January 1993.

“No Trump nominee appointed to an important position gets confirmed easily, much less unanimously,” John Malcolm, director of the Meese Center for Legal and Judicial Studies at The Heritage Foundation, told The Daily Signal.

While plenty has changed in Washington in the past 28 years, the political environment was just as toxic in many respects.

The Judiciary Committee will begin to consider Trump’s nomination of Barr as special counsel Robert Mueller continues to investigate whether the Trump campaign was connected to Russian meddling in the 2016 election. It will have been three months since a tough political battle over Senate confirmation of Supreme Court Justice Brett Kavanaugh.

In that atmosphere, Biden as Judiciary Committee chairman lauded Barr as a “heck of an honorable guy.” (The Delaware Democrat, of course, went on to serve for eight years as vice president under President Barack Obama.)

Sen. Patrick Leahy, D-Vt., now the senior Democrat on the Judiciary Committee, was part of the Senate majority that voted to confirm Barr in 1991.

Leahy said he thought Barr, as attorney general, would be “an independent voice for all Americans—not just the president.”

Then-Rep. Charles Schumer, D-N.Y., who was chairman of the House Crime and Criminal Justice Subcommittee, said: “Mr. Barr has proven to be a capable deputy attorney general. He did a good job of helping run the department in troubled times.”

However, as Senate minority leader, Schumer has called for Trump to nominate someone else.

This time, committee Democrats in the Senate minority likely will push Barr to commit to protecting the special counsel’s investigation into Russian interference in the 2016 election. He also has a record to defend from his previous tenure as attorney general.

Last summer, Barr wrote a critical memo on the Mueller probe, something Democrats have pounced on.

As attorney general, Barr has said, he urged Bush to pardon several figures in the Iran-Contra scandal during Ronald Reagan’s presidency, which involved the United States selling arms to Iran to help finance rebels in Nicaragua.

The senior Bush’s most notable pardon was of former Defense Secretary Caspar Weinberger, who was indicted in an October surprise before the 1992 presidential election, which Bush lost to Bill Clinton.

“I went over and told the president I thought he should not only pardon Caspar Weinberger, but while he was at it, he should pardon about five others,” Barr said in 2001.

Barr, 68, also is expected to face current questions on issues such as abortion, illegal immigration, and transgender individuals in the military.

Malcolm was an assistant U.S. attorney from Atlanta in 1991, when Bush nominated Barr for attorney general, and attended the Rose Garden announcement of the nomination. He said it’s difficult to compare the two political eras.

“Washington has always been a tough town,” Malcolm told The Daily Signal. “It’s hard to compare. You do have two politically fraught investigations, one with an independent counsel, one with a special counsel. You also had two very contentious [recent] Supreme Court confirmations, both of which included allegations of sexual misconduct. Still, it’s hard to compare the times.”

Before his first nomination to run the Justice Department, Barr served as deputy attorney general under Attorney General Richard Thornburgh, who resigned to run for Senate in Pennsylvania. Bush immediately made Barr acting attorney general.

Bush’s nomination of Barr for the job was reported as an effort to avoid another contentious Senate battle, as occurred with the Thomas hearing.

As he likely will do before the Judiciary Committee this month, in 1991 Barr asserted the Justice Department shouldn’t have to contend with political interference.

From William Barr’s 1991 Senate confirmation hearing: “Nothing could be more destructive of our system of government, of the rule of law, or Department of Justice as an institution, than any toleration of political interference with the enforcement of the law.” pic.twitter.com/9AQDtvMExQ

In one of the more notable moments, Barr told senators that he thought the Supreme Court wrongly decided Roe v. Wade, the 1973 case that legalized abortion across the nation.

Barr, then 41, told the committee that he believed in a right to privacy, but had “no fixed or settled views” on the scope of that right. He did, however, say: “I do not believe it extends to abortion.”

The debate over abortion is “a legitimate issue for state legislators,” Barr added. “That’s where the decision ought to be.”

“I believe Roe v. Wade should be overruled,” Barr said. “I think that the basic issue is whether or not abortion should be something that is decided by society.”

Biden, the committee chairman, said he disagreed with Barr but that his response was “the first candid answer” someone had given the committee on the question.

“It’s astounding to me,” Biden said. “You should be complimented.”

For his part, Metzenbaum, who asked the question on abortion, praised Barr’s honesty.

“It is frankly refreshing to have a nominee admit what we all know—that this administration opposes a woman’s right to choose,” Metzenbaum said.

No attorney general has the authority to overturn a Supreme Court decision, of course, but may only express the administration’s legal opinion.

“I know of no one on the Democratic side asking for a roll call vote [on Barr],” Biden said later. “I see no need for one.”

With that, on Nov. 26, 1991, the Senate, which had a 57-seat Democratic majority at the time, confirmed Barr by a simple voice vote.

Biden also described Barr as “a throwback to the days when we actually had attorneys general that would talk to you.”

When Trump reportedly was considering nominating Barr to run the Justice Department again, Leahy told the Washington Examiner that the former attorney general could “have majority support from Republicans and Democrats.”