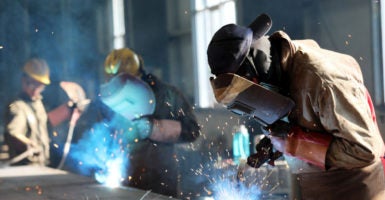 The U.S. economy created 312,000 jobs in the month of December, according to the Bureau of Labor Statistics. (Photo: AFP/Getty Images)

After a disappointing month for the stock market, few could have predicted just how strong the rest of the economy would hold up. But for those concerned about the state of the economy, Friday’s jobs report will come as reassurance.

The Bureau of Labor Statistics reported Friday that the U.S. economy added a whopping 312,000 jobs, shattering expert predictions and once again vindicating the pro-growth policies of the Trump administration.

In addition, the bureau revised its jobs numbers from October and November, adding 58,000 jobs previously not reported.

Continuing the good news, the labor force participation rate rose to the highest level since the president took office, increasing from 62.9 percent to 63.1 percent and adding 419,000 people to the labor force.

The job gains continue to tell the story of a strong economy. The report showed gains in critical sectors like manufacturing (32,000 jobs), construction (38,000 jobs), food service and drinking (41,000 jobs), retail trade (24,000), and health care, with the largest monthly increase in the history of the jobs report (50,000 jobs).

While the unemployment rate increased slightly from 3.7 to 3.9 percent, we saw the number of job leavers increase by 142,000. This reflects people who quit or otherwise voluntarily left their previous job and immediately began looking for new employment.

This report continues to demonstrate that a posture of pro-business policy like tax cuts, reducing harmful regulations, and a willingness to reduce Washington’s involvement within our everyday lives inspires confidence in the private sector.

If you turn on the news, you will often hear that the economy is doomed for destruction. And while we remain concerned about the uncertainty tariffs create, nervous about the long-term impact of the Federal Reserve’s monetary experimentation in the wake of the Great Recession, and want Congress to tackle the out-of-control debt, Main Street America is continuing to push forward.