3 Things to Watch in Trump’s Shutdown Talks With Democrats 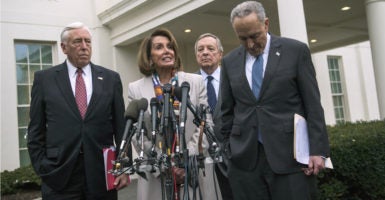 Two of President Donald Trump’s key themes as a candidate were building a border wall and being a deal-maker. But he is struggling on both points during the partial government shutdown as Democrats officially take control of the House of Representatives.

Trump and congressional leaders will meet again Friday after an unproductive gathering Wednesday in which Democrats vowed to pass a bill in the House that Trump told them he wouldn’t support.

Trump invited top congressional Republicans and Democrats to the White House for the Wednesday meeting, which included Department of Homeland Security officials. The “border security briefing” came as Democrats prepared to take over the House on Thursday and the sticking point in resolving the shutdown remained funding for a physical barrier at the southern border to curb illegal immigration.

Border Security and the Wall “thing” and Shutdown is not where Nancy Pelosi wanted to start her tenure as Speaker! Let’s make a deal?

The current partial shutdown tied Wednesday for the sixth-longest government shutdown in U.S. history, according to Politico.

The shutdown affects only a quarter of the government, because Congress has funded the other 75 percent through September. Affected departments include Agriculture, Commerce, Justice, Homeland Security, State, and Transportation.

The outgoing Republican-controlled House passed a spending bill with more than $5 billion for a physical barrier on the southern border.

The Senate already had passed a continuing resolution through February without funding for the wall. The Senate remains in Republican hands, with a slightly bigger majority and Majority Leader Mitch McConnell, R-Ky., still in the top post.

Here are three things to look for as talks to resolve the shutdown continue.

After the White House meeting, Senate Minority Leader Charles Schumer, D-N.Y., told reporters who shouted questions: “Will you please let us speak for a few minutes?”

The House will take up a proposal Thursday that Democrats say is modeled after a measure that passed the Senate late last year, Democratic leaders said after the meeting with the president.

Nancy Pelosi of California is set to become House speaker Thursday as the Democrats take charge as a result of the midterm elections in November.

“Tomorrow, we will be bringing forth legislation that will be based on actions taken by the Senate, on bills that passed on the floor of the Senate by over 90 votes,” Pelosi told reporters outside the White House.

“We have given the Republicans a chance to take yes for an answer,” she said.

Pelosi said later that “Democrats have been committed to protecting our borders.” However, she never answered reporters’ questions about why the proposal would have no wall funding, or how Democrats defined border security.

Trump has sought up to $5 billion for the wall. Democrats have announced plans to pass a stopgap measure to fund the government without money for the wall but $1.3 billion for border security.

The plan would fund the bulk of the government’s expenses through September, but delay funding for the Department of Homeland Security until February. The DHS budget normally would include any funds to build a wall.

Schumer said that during the meeting, he asked Trump: “Mr. President, give me one good reason why you should continue your shutdown?”

He said Trump “could not give a good answer.”

“It’s not helping the president, it’s not helping the Republicans to be the owners of this shutdown,” said Schumer, who last year forced a government shutdown that lasted for a weekend. “Today we are giving them an opportunity to get out of that and open up the government as we debate border security.”

During a Cabinet meeting Wednesday, acting Attorney General Matthew Whitaker said the president should be commended for “giving up” his Christmas and New Year’s holidays, working in the White House “while some members of Congress went on vacation.”

Pelosi took a much-publicized Hawaii vacation after the shutdown began.

The White House meeting was supposed to be a homeland security briefing. However, that aspect apparently didn’t go very far.

Homeland Security Secretary Kirstjen Nielsen sought to explain the threats at the border to the eight members of Congress gathered at the White House.

However, Schumer was in no mood to hear it, according to House Majority Leader Kevin McCarthy, R-Calif.

McCarthy, set to become House minority leader, said Trump has asked members to return to the White House on Friday after the two chambers’ leadership elections are over.

“I was a little disappointed, I would say, with some on the other side,” McCarthy said. “Once the secretary started, Sen. Schumer interrupted her. They really didn’t want to hear it. … They wanted to go on about their bill they are bringing up tomorrow. The president has been very clear it’s not what he would support, and Leader McConnell said he’s not bringing anything up that’s not going to fund the wall.”

McCarthy went on to talk more about Schumer’s interrupting Nielsen.

“Secretary Nielsen wanted to go over some very alarming numbers, things that are actually happening at the border,” he said. “There were more than 3,700 known or suspected terrorist that tried to cross the border.”

McCarthy also said the shutdown may not last long.

“It doesn’t have to last that much longer at all,” he said.

Republicans and administration officials in recent days suggested a compromise of $2.5 billion or $2.1 billion to pay for building a wall.

McCarthy referred to Vice President Mike Pence’s earlier meeting with Schumer about working through a compromise.

Pence noted during the Cabinet meeting Wednesday that the White House is ready to make an acceptable deal.

“I want to thank you for the strong stand you have taken on border security,” Pence told Trump during the Cabinet meeting. “We’re ready to deal. We have an offer on the table.”

But the president insisted a deal must include a physical barrier at the southern border.

Trump said drones and other technology are not enough.

“I know more about drones than anybody,” he said.

During the Cabinet meeting ahead of the meeting with congressional leaders, Trump accused Democrats of pushing the government shutdown with an eye on the 2020 election.

“We are in a shutdown because Democrats refuse to fund border security,” Trump said.

Responding to critics who say a wall is outdated as a barrier, Trump said its effectiveness endures.

“The wheel, the wall, some things never get old,” the president said.

Early Wednesday, Trump insisted the wall would quickly pay for itself. In a tweet, he said the new trade deal called the United States-Mexico-Canada Agreement essentially meant Mexico is paying for the wall.

Mexico is paying for the Wall through the new USMCA Trade Deal. Much of the Wall has already been fully renovated or built. We have done a lot of work. $5.6 Billion Dollars that House has approved is very little in comparison to the benefits of National Security. Quick payback!

During the Cabinet meeting, Trump repeated his claim that his predecessor, Barack Obama, has a wall “around his compound” in Washington. Various media organizations have reported this is not the case at the Obama residence.