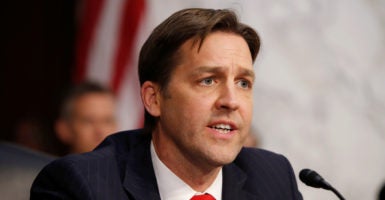 In his book "Them," Sen. Ben Sasse, R-Neb., says we must recover our love of community and family if America is to survive. (Photo: Joshua Roberts/Reuters/Newscom) 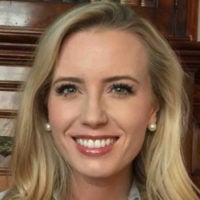 Alexandra Hudson is a writer, bibliophile, and refugee from federal politics. She earned an M.S. in comparative social policy at the London School of Economics as a rotary scholar, lives in the American Midwest, and is currently writing a book on civility. She contributes to the Wall Street Journal, Quillette, the Washington Examiner, and The Hill.

“All of humanity’s problems stem from man’s inability to sit quietly in a room alone,” mused Blaise Pascal, scientist and anti-Enlightenment philosopher, four centuries ago in his “Pensées.”

Pascal, a man ahead of his time, astutely anticipated the plight of the modern, alienated soul. He would no doubt applaud Nebraska Sen. Ben Sasse’s account of Americans’ current predicament: We are lonely—perpetually distracted from what matters by a frenetic news cycle, angry political leaders, and chaotic technology—and have misplaced our meaning in politics. In his book “Them: Why We Hate Each Other—and How to Heal,” Sasse says we must recover our love of community and family if America is to survive.

He is absolutely correct. We all crave community and authentic human relationship. And in spite of being more connected digitally than ever before, we find ourselves further apart. We have fewer friends (over the last 30 years, the average American has gone from three to fewer than two), we are more addicted, and spend more time on the “thin” relationships on social media than “thick” relationships face-to-face.

All this has taken a toll on the collective American soul. It should come as no surprise that our nation’s public sphere and discourse mirror this fracture and discontentment. And we shouldn’t deceive ourselves, Sasse argues, into thinking that the next election result will fix these problems—they were not, after all, caused by politics in the first place.

>>> Everyone Needs a Close Community, but Those Are Fewer and Fewer

Sasse’s opening anecdote recounts a 1995 heat wave in Chicago—the deadliest in American history—that he and his wife lived through. Tragically, over the course of a week, 739 people died.

The common thread linking the people who passed away was their lack of community: They did not have people in their neighborhood or family members who thought to check in on them and ensure they moved to cooler places. To compound the loneliness, some of the people who died were found in their homes with piles of unsent letters around them—letters asking for forgiveness and reconciliation with loved ones.

Sasse explains how these deaths illustrate the real danger of an increasingly atomized America: Our loneliness is literally killing us, a fact further underscored by today’s opioid crisis.

We don’t have friends; we have virtual communities that have replaced the face-to-face. We are terrified of being alone—but rather than treat the source of our fear, technology simply distracts us from our anxieties. We worry that our lives lack purpose, so we look to the many “rage peddlers” of our current moment to ensure we have something to be angry about and fight for.

The book is breezy and lighthearted, yet informative and insightful—much like the author himself. Reading the book, it is easy to forget that the sitting senator has a PhD in American history (from Yale University) and was at one time a professor and college president.

Despite these impressive credentials, as his personal Twitter account illustrates, he has a good sense of humor and doesn’t take himself too seriously. Still, he takes the challenge facing our nation seriously, and we should listen to him.

It’s also clear that, as a former consultant for McKinsey & Co., Sasse is also used to giving advice. He gives readers some helpful and specific suggestions for what we can do to heal America: move to small-town America, buy a burial plot, watch less cable news, establish roots in a rootless world, take a technology Sabbath. Many of these tips are useful, but Sasse is less clear on how to forge new relationships and deepen existing ones.

Americans have a global reputation for being a warm and friendly bunch. But have we forgotten the art of pleasant conversation with a stranger? Are we rusty on the techniques of quickly identifying a common point of interest with another?

It’s hard to cultivate friendships and community, and it certainly doesn’t happen overnight. We all seek the path of least resistance, and fixes that are easy and quick. It’s more leisurely to seek community online, on our terms and our own time. It’s less emotionally risky to numb our loneliness with distractions—research shows that the brain interprets social rejection similarly to physical pain—and to locate our identity and meaning in the fury of the day rather than something transcendent.

But Pascal reminds us of the need for silence and solitude in a world of mayhem, and that while the world’s distractions may be easier and safer, they are less rewarding and less lasting.

Sasse is writing to Americans living in what he deems a moment of crisis and division, which he attributes to our personal fragmentation. Yet Sasse also recognizes that to some extent, we’ve always been this way: personally broken and prone to misplacing our meaning. This, he contends, is the human condition.

We have political leaders who lack integrity, social media echo chambers, rampant drug addiction, a flourishing and rage-inducing media industry—all of which reveal a broken human condition. But Sasse persuasively tells us that this should not prevent us from trying to make it marginally better.

Pascal famously wrote that “the heart has reasons that reason cannot understand.” This rings true in our moment. Intellectually, and on paper, we recognize that most of us have never had it so good, at least materially. We have higher incomes, our dollars go further, we are better educated, can travel more, have greater opportunities, and are more employed than in past years.

Nonetheless, we are impoverished emotionally, relationally, spiritually. The human heart has needs that cannot be met by physical provisions alone.

America is lonely and fragmented. Ben Sasse has some ideas to make it less so. But the ultimate solution is up to us, and how we choose to become the tools of community and unity in our everyday lives.

America’s future depends on it.