Putting the Arrest of Huawei Executive Into Context 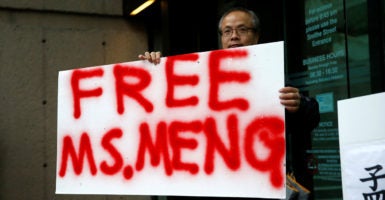 While President Donald Trump was meeting with Chinese President Xi Jinping in South America about two weeks ago to resolve outstanding trade issues, authorities in North America were arresting the daughter of a Chinese telecommunications titan on fraud charges.

For many in Washington, China’s government is a common denominator that links these two issues. However, it’s not in the interest of the U.S. to simply group everything related to China under the China (or trade) policy umbrella, potentially blurring the lines between our principles and the protection of the rule of law.

The timing of the arrest in Canada was unfortunate for the White House. It cast a showdown over U.S.-China public relations and added uncertainty, despite recent success, to the trade negotiations with China.

It has since reignited the question that’s consistently been asked in Washington and Beijing over the past two years: Does the White House intend to combine economic and security issues together in some sort of all-encompassing geopolitical strategy to confront China?

The same question was asked after the president blocked the Chinese acquisition of Lattice Semiconductor Corp., and it was a looming question after Vice President Mike Pence gave a speech at the Hudson Institute in early October, in which he aired the grievances that the White House has with Beijing.

The speech he gave at the Asia-Pacific Economic Cooperation summit in mid-November did little to quell those concerns.

Generally speaking, the answer to that question is—and should continue to be—“no.” The relationship with China is too complex, and the cost of a state-led approach to manage American’s economic freedom is far too high to approach this way.

Fortunately, that’s not what  the arrest of Huawei’s chief financial officer, Meng Wanzhou, was about. Her arrest was on the very specific charge of defrauding U.S. financial institutions.

According to court reports, Meng was arrested for allegedly conspiring to misrepresent the relationship between Huawei and a company called Skycom, contending that Skycom was an unofficial subsidiary of Huawei that was used to engage as a contractor with Iran.

So, Meng’s case is not about geostrategy, and it is not exactly about Iran sanctions. But neither is it about the broader concerns experts think Huawei poses to U.S. national security.

Huawei Technologies is China’s largest telecommunications company and a national champion for the Chinese Communist Party. U.S. officials see the proliferation of Huawei technology as both a cybersecurity and espionage threat.

That’s one reason why legislators prohibit federal agencies and their contractors from purchasing any equipment from Huawei or ZTE Corp., another Chinese telecommunications giant.

U.S. officials have been warning governments overseas to be wary of the proliferation of Huawei and ZTE technology, specifically as it concerns the development of 5G communications—the next generation of information sharing.

Already governments in Japan, Australia, Taiwan, and New Zealand and some private companies have decided to reject Huawei technology in their 5G infrastructure.

The economic complaints the Trump administration has with China aren’t new, whether it’s trade barriers, requirements that some companies enter into joint ventures with Chinese companies, favoritism the Chinese government gives to its national champions and state-owned enterprises, or the theft of intellectual property.

No one will argue that China is anywhere near as economically free as the U.S.

Even if one disagrees with Trump’s tactics, it’s good that Washington finally has a president who is willing to be more assertive about these concerns. But when all the issues get lumped together under the China policy umbrella, the U.S. risks underperforming on policy action and violating important principles in the process.

Likewise, rule-of-law issues—such as fraud, violating Iran sanctions, or intellectual property theft—should be dealt with on their own merits.

Meng has a big problem, but it’s not because of American concerns with Huawei or Iran policy or the U.S.-China trade impasse. It’s because she’s accused of violating the law.

The only way to make that clear is to keep each of America’s concerns with China in its proper context.