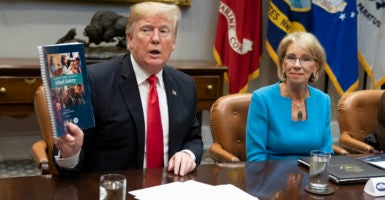 The Federal Commission on School Safety, established in response to the Parkland, Florida, school shooting in February, issued its final report, making a series of recommendations.

The 177-page report also tackles building security, violence in the media, and school resource officers, and opposes raising the age for buying guns.

“This is one of the most important things we can do for schools and communities to help them think about creating a positive culture and climate in schools,” Education Secretary Betsy DeVos told The Daily Signal, referring to the report. “We have to look at kids as individuals, and make sure they are not lost through the cracks and feel isolated.”

DeVos was among the participants in a White House roundtable discussion with other Cabinet members and with community leaders seeking to protect schools and curb gun violence.

“Nothing is more important than protecting our nation’s children,” he added.

“I want to thank you for listening,” Byars said during the roundtable talk at the White House. “Previous administrations wanted to bury their heads in the sand.”

Tuesday’s report doesn’t call for federal legislative action, but does push for ways that multiple departments and agencies can work with local school districts through federal grants, rulemaking, and guidelines for promoting mental health and security issues in schools.

“This is a start. This will not sit on a bookshelf,” Homeland Security Secretary Kirstjen Nielsen said of the report during the roundtable.

Here are the top five takeaways from the report.

The report notes the need to reverse the Obama administration’s policy guidance on how local school districts should be able to discipline misconduct by students.

“Maintaining order in the classroom is a key to keeping schools safe,” the commission’s report says. “Teachers are best positioned to identify and address disorderly conduct.”

However, guidance issued by the prior administration advocated a federal solution that undercut the ability of local officials to address the impact of disciplinary matters on school safety.

The guidance also relies on a dubious reading of federal law. The guidance should be rescinded, and information about resources and best practices for improving school climate and learning outcomes should be developed for schools and school districts.

In 2014, the Obama administration’s Department of Education issued a “Dear Colleague” letter to school districts across the country. The goal was to crack down on the perceived racial disparities in what President Barack Obama called the “school-to-prison pipeline.”

DeVos heard from teachers and administrators about the negative effects of the Obama-era rules, she told The Daily Signal.

“We will be moving fairly quickly to address this rule, because it has been particularly hard for teachers and school leaders to deal with,” she said.

Many experts have argued the new regulations prompt school districts to fear investigations by the U.S. Department of Education, and as a result, adopt lower standards and are unwilling to punish students, and teachers feel they have lost control.

2. The Media’s Role in School Violence

A major problem cited about school shootings is that they make the gunmen famous, DeVos said.

“More than one time, we have heard complaints from parents of the victims about the attention given to those who carry out these awful incidents,” she said. “It [attention] gives an incentive to pursue these horrid, awful acts, because of the notoriety they gain. We’re just asking the media not to use their names and photographs.”

DeVos stressed that that wouldn’t be a matter of censorship. Rather, it’s a matter of asking federal, state, and local officials—as well as media outlets—to minimize the attention given to the perpetrator.

The report calls for local governments and media outlets to adopt a “No Notoriety Campaign,” defined as “not using shooters’ names or photos, but instead focusing on facts and victims,” the report says.

The report also addresses violent entertainment and the rating systems for it.

“The role of the family is central to controlling violent entertainment,” the report says. “State and local educational agencies should collaborate with parents to strengthen internet safety measures to curb access to inappropriate content.”

The report adds that the entertainment industry—movies, TV, and video games—has a role to play.

“In addition, the entertainment industry should ensure its rating systems provide parents with the full complement of information needed to make informed decisions about entertainment for their children.”

During the roundtable, Rusty Norman, president of the board of trustees of Santa Fe, Texas, schools said there was a need for “hardening of schools” from the “epidemic of violence that has got to be stopped.”

DeVos stressed that would not be a national policy.

“Every school district is different and has different needs,” the education secretary explained.

“States and local communities, in concert with law enforcement, should consider various approaches to school safety based on their own unique needs,” the report says. “School districts may consider arming some specially selected and trained school personnel as a deterrent.”

4. No Age Increases for Gun Purchases

After the Parkland, Florida, school massacre, in which 17 died and 17 others were injured, Trump talked about supporting increasing the age for buying a gun from 18 to 21. Republican Gov. Rick Scott signed legislation to do so in Florida.

The report issued Tuesday said such measures were likely ineffective.

“The available research does not support the conclusion that age restrictions for firearms purchases are effective in reducing homicides, suicides, or unintentional deaths,” the report states. “Most school shooters obtain their weapons from family members or friends, rather than by purchasing them. States should consider offering training or other resources to promote safe storage of firearms.”

DeVos said raising the age is something that could require continued study. However, as of now, no evidence exists showing a restriction would reduce violence.

A more effective policy would be for states to adopt laws permitting “extreme-risk protection orders,” the report says.

Such orders are intended to prevent individuals who pose a threat to themselves or others from possessing or purchasing firearms.

The report notes that “school-based mental health and counseling for young people is an important aspect of prevention.”

The report adds that casualties could have been higher in Parkland if the high school didn’t have a preparedness plan in place.

Building and campus security are also key, the report states.

“A risk assessment can identify vulnerabilities and enable the development of a strategy to address any security gaps,” the report says. “Effective security plans use a layered approach across all three areas of a school: entry points, the building envelope (e.g., walls, roofs, windows, doors), and the classroom.”