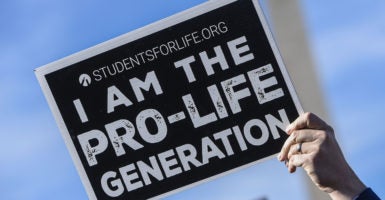 It may seem that pro-life activists have a steeper hill to climb after the results of the midterm election results, but one of the movement’s leaders says he sees avenues for hope.

“When you’re in the minority, there are ways you can kind of build up your base,” Tom McClusky, vice president of government affairs for the March for Life Education and Defense Fund, said at a recent press briefing.

McClusky’s organization plans the March for Life demonstration each year in Washington to mark the anniversary of the Supreme Court decision legalizing abortion across the nation. Its theme for the 46th annual march on Jan. 18: “Unique from Day One: Pro-life is Pro-Science.” Conservative pundit Ben Shapiro has been confirmed as one guest speaker.

Though McClusky voiced disappointment that the outgoing Republican-led House and Senate failed to pass pro-life legislation, he said opportunity exists to move the needle when the Democrats take over the House in January, even if there will be fewer abortion-related battles.

“Since that option is no longer open to us, we’re going to be looking at what kind of things this administration can do beyond what they’re already doing,” he said in the Dec. 5 briefing.

McClusky noted that the Trump administration already has planned a variety of regulations, including some related to health care funding, transparency in abortion procedures, and respecting the consciences of all those involved.

Another area of action McClusky mentioned: President Donald Trump’s judicial nominations, which the Senate must confirm.

McClusky also emphasized his hopes that Trump, like the previous two Republican presidents, would send a letter to congressional Democrats vowing to veto any bill if Democrats tried to undo the existing ban on government funding of most abortions.

March for Life officials would like Trump to follow the examples of Presidents George H.W. Bush and George W. Bush, he said.

“Because right now we have two of the most pro-abortion members of the [House] Democratic caucus, Nita Lowey and Rosa DeLauro, who will be in control of most of the pro-life provisions in the appropriations package,” McClusky said.

Reps. Nita Lowey, D-N. Y., and Rosa DeLauro, D-Conn., have been known for their pro-choice stances on the House Appropriations Committee.

Lowey is slated to become chairman of the committee after the new Democrat-run House is sworn in Jan. 3.