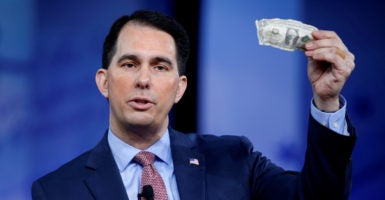 "I may have reformed myself out of a job,” quips Wisconsin Gov. Scott Walker, who will leave office Jan. 7. Pictured: The Republican governor speaks during the Conservative Political Action Conference on Feb. 23, 2017, in National Harbor, Maryland. (Photo: Joshua Roberts/Reuters/Newscom)

MADISON, Wisconsin—As crowds swelled inside and outside the state Capitol and protesters sprayed Republicans with spit, insults, and hatred, Gov. Scott Walker could be forgiven for having a moment of pause, for asking himself if it was all worth it.

Wisconsin’s public-sector unions were calling for Walker’s political head. Some wanted more. They threatened his job, his life, his family.

All because the newly elected Republican governor was willing to challenge the status quo, to find a long-term fix to a state budget that had for so long jumped from crisis to crisis, to restore power to a long-forgotten constituency: Wisconsin taxpayers.

Wisconsin has come a long way since Walker’s first turbulent days in office in 2011. The Republican governor’s loss to Democrat Tony Evers in the Nov. 6 election marks the end of an era of sweeping conservative reforms.

Walker’s signature success, Act 10, is, for many, the defining win of his two eventful terms. But it was just the beginning of a long list of limited-government reforms, the likes of which Wisconsin never had seen before.

As the battle over Walker’s “budget repair bill,” commonly known as Act 10, intensified in the late winter and early spring of 2011, some Republicans saw retreat as the only option.

Walker, according to those who know him best, never considered backing down—even as Democrats and their big labor allies began organizing a political recall campaign against him.

The “tone at the top,” what the Milwaukee Journal Sentinel once derisively described as Walker’s “reptilian calm,” was precisely what this Republican revolution needed to lead a sustained campaign of conservative reforms.

As Walker noted in his 2013 memoir, “Unintimidated: A Governor’s Story and a Nation’s Challenge,” Wisconsin was the diminished labor movement’s line in the sand. The Badger State was the birthplace of public-sector unions in the 1930s, and in 1959 it became the first state to allow collective bargaining for government employees.

Big labor and its political allies financed an expensive campaign to oust the Republican governor. Walker became the first governor in U.S. history to survive a recall attempt.

Despite seemingly endless court challenges and Wisconsin’s version of the “resistance,” Act 10 not only survived, it delivered billions of dollars in relief to state and local taxpayers. It helped fix the $3.6 billion budget mess Walker inherited from his Democrat predecessor, and it brought workplace liberty to tens of thousands of public employees.

Eric Bott, director of Americans for Prosperity-Wisconsin and a legislative assistant during the Act 10 battles, said Walker’s legacy in part is his lasting impact on worker freedom.

From the dismantling of compulsory union dues in the public sector to signing the legislation that made Wisconsin the 25th right-to-work state, Bott said, the governor drove a good deal of change.

Even as the budget repair bill and the Capitol protests grabbed the national spotlight, Walker and the Republicans led a flurry of significant limited-government and liberty reforms in the first 180 days of the governor’s first term.

Walker and the Republican-led Legislature can lay claim to delivering the largest tax cuts in state history. All told, tax relief tops $8.5 billion.

More than half of that came in the form of income and franchise tax reduction, another $3.56 billion in property tax cuts.

Mike Huebsch, the former state lawmaker who was Walker’s first secretary of administration, said the litany of conservative reforms and Walker’s focus on changing state government’s relationship with business set the stage for soaring state revenue, hefty surpluses, and the tax breaks that followed.

“Property taxes were a big issue. They were driving senior citizens out of their homes,” Huebsch said. “These were the issues that drove us and made it clear we needed to make fundamental changes.”

As Walker began his first term in January 2011, Wisconsin was viewed as the “California of the Midwest,” Bott said.

Walker and the Legislature began working on changing that mentality immediately with a series of regulatory reforms.

One of the first changes came with Act 21, which Bott called “quintessential regulatory reform.” It effectively ended state bureaucracy authority to write rules and regulations that affect laws without explicit and express authority from the Legislature.

Walker saw the dangers posed by unchecked bureaucrats. In 2017, he effectively handed back some executive branch power by endorsing legislation called the REINS Act (Regulations from the Executive in Need of Scrutiny Act).

Wisconsin became the first state in the nation to adopt the measure, which provides greater legislative oversight of regulations adopted by state agencies.

The governor pushed a suite of reforms, including adding work requirements for welfare programs, limiting benefits for families of children who are habitually truant, and setting a $25,000 liquid asset limit on Wisconsin food stamp beneficiaries.

Earlier this year, Walker called a special session of the Legislature to take up 10 bills, part of his “Wisconsin Works for Everyone” welfare reform initiative. All but one were approved by the Republican majority.

The reforms underscore Walker’s governing philosophy on limiting the ever-encroaching reach of government in the lives of individuals.

“We want to help those in need move from government dependence to true independence through the dignity of work,” Walker said in April, after signing the nine bills into law.

Today, Wisconsin’s unemployment rate is at historic lows, more people than ever are working, and global players such as Amazon and electronics manufacturer Foxconn are making the Badger State home.

Still, to Wisconsin liberals, Scott Walker remains the bogeyman, the fountainhead of their misery, their conspiracies, and their failures over the past eight years.

His limited-government policies were so anathema to their big-government religion that progressives launched a recall movement against him.

They hated him so much that, in one of the darkest chapters in Wisconsin history, they readily endorsed a secret, unconstitutional “John Doe” investigation into Walker, his campaign, and many center-right organizations in the state.

But Walker and the conservative Legislature embraced the battle, and bested progressives at nearly every turn.

Grover Norquist, president of Americans for Tax Reform, said Walker’s legacy of conservative leadership emboldened governors and lawmakers in other states “to take on government sector unions, the most powerful force in American politics, and enact similarly bold reforms.”

Just days after his defeat, Walker reflected on his tenure. He said he will be remembered as a reformer.

“I’m particularly proud that, because of our reforms, that enabled the people—not the government—to create more jobs, more opportunities, and higher wages in this state,” Walker said.

He paused, and considered that he may have been too successful on that score.

“We’ve been such a reformer, I may have reformed myself out of a job,” the governor said.