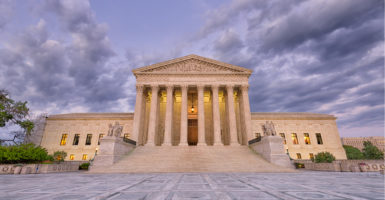 The Supreme Court fell one vote shy of the necessary four required to hear the case. (Photo: Sean Pavone/Getty Images)

The Supreme Court on Monday missed an opportunity to bring clarity to an area of the law about which the lower courts are divided: Whether states can prevent Medicaid funds from going to pay for non-abortion services at Planned Parenthood clinics.

Justice Clarence Thomas dissented from the court’s decision not to take up the case, joined by Justices Samuel Alito and Neil Gorsuch. Thomas suggested that the other justices’ “refusal to do [their] job here … has something to do with the fact that some respondents in these cases are named ‘Planned Parenthood.’” Justice Brett Kavanaugh did not join the dissenters, but that does not mean he (or the other justices, for that matter) agree with the arguments made by Planned Parenthood and the other respondents.

Thomas highlighted that, too often, the fact that abortion is involved in a case causes some members of the court to cast aside traditional legal and constitutional principles. This “abortion distortion” has led the court to twist free speech principles and undermine states’ commonsense health and safety standards to rule in favor of the abortion industry.

Now, the court has ducked the opportunity to clarify something about which the lower courts are in disarray: Does federal law allow individual Medicaid recipients to sue over states’ Medicaid provider decisions?

These cases are about much more than abortion. As Thomas pointed out, “Around 70 million Americans are on Medicaid … . If the majority of the courts of appeals are correct, then Medicaid patients could sue when, for example, a state removes their doctor as a Medicaid provider or inadequately reimburses their provider.”

He continued, “Under the current majority rule, a state faces the threat of federal lawsuit … whenever it changes providers of medical products or services for its Medicaid recipients.” It may even “enable Medicaid recipients to challenge the failure to list particular providers.”

It’s unmistakable that abortion looms in the background of these cases arising out of Kansas and Louisiana. Following the release of videos that raised disturbing allegations of Planned Parenthood profiting from the sale of organs from aborted babies and charges of fraudulent billing practices, several states, including Kansas and Louisiana, sought to cancel their agreements with the abortion giant.

Then, Medicaid recipients sued, and the main legal issue is whether they have a judicially enforceable right to select their health care provider.

The lower courts are in disagreement about whether this language creates an individual entitlement that is enforceable in federal court.

In the past 18 months, three courts of appeals have ruled on such cases, adding to the confusion of three appellate rulings in earlier cases. The U.S. Court of Appeals for the 8th Circuit concluded that a law directing officials to take an action—which § 1396a(a)23(A) does—does not create a judicially enforceable right.

The court held that it is not clear Congress intended to create an individual right to challenge the disqualification of a health care provider, and Congress’ unambiguous intent is a prerequisite for the lawsuit to move forward.

But the U.S. Courts of Appeals for the 5th Circuit and 10th Circuit reached the opposite conclusion in cases out of Louisiana and Kansas, holding that federal law affirmatively requires states to allow Medicaid recipients to choose their providers. Louisiana and Kansas both asked the Supreme Court to take up this issue—an invitation the justices rejected.

Thomas concluded his dissent, taking his colleagues to task for failing to see the forest for the trees. He wrote:

Some tenuous connection to a politically fraught issue does not justify abdicating our judicial duty. If anything, neutrally applying the law is all the more important when political issues are in the background. The Framers gave us lifetime tenure to promote ‘that independent spirit in the judges which must be essential to the faithful performance’ of the courts’ role as ‘bulwarks of a limited Constitution,’ unaffected by fleeting ‘mischiefs.’

A similar Medicaid case may be pending before the 4th Circuit soon, so the Supreme Court could be presented with another opportunity to clean up, as Thomas put it, the “mess” that has been made over time.

With accusations of fraud and abuse of Medicaid programs by numerous abortion providers, states should be allowed to maintain the integrity of their programs and tailor them to best reflect state priorities. But the Supreme Court’s unwillingness to settle the question of an individual’s private right of action is hindering states’ ability to carry out this basic obligation.

For now, due to the disagreement among the lower courts, Medicaid recipients in different states have different rights. Only the Supreme Court can clarify the confusion.

In short, “it is our job to fix it,” Thomas says—but only he, Alito, and Gorsuch are interested in doing so.