On Gender, the Science Is Deafening 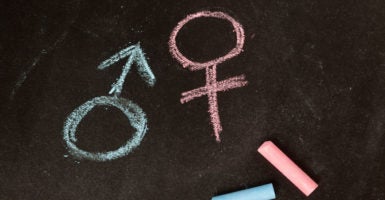 “There is absolutely no rigorous science that has found a trait called ‘gender identity’ in the brain, body, or DNA," Dr. Michelle Cretella says. (Photo: joxxxxjo/Getty Images)

Reading the headlines this week is like taking a trip to an alternate universe. Ten years ago, if you’d have said that in 2018 teachers would get fired for calling a girl a girl, most people wouldn’t have believed you. Unfortunately, that’s the ridiculous world Americans are waking up to every morning. But to most people’s relief, not everyone is playing along with this charade. And that includes President Donald Trump.

Almost two years in, this administration is still trying to mop up the mess made by Barack Obama. And considering the huge disaster it inherited, it’s amazing how much progress the White House has already made rolling back the absurdity of Obama’s LGBT legacy.

After squashing the government’s gender-free bathroom mandate, Trump moved on to the military. Now, he’s directed his agencies to make one of the most important changes of all: protecting the 54-year-old Civil Rights Act.

Obama chose to read the law the way he wanted—not how it was written by Congress. For the last few years of his administration, he started using his own interpretation of the Civil Rights Act to give special protections to people who identify as transgender. There’s just one problem: that’s not what the 1964 Congress meant—and it’s not what the statute says.

So, Trump issued his own memo. For the purposes of his administration, the Justice Department explained, “sex discrimination” would not include “gender identity.”

That was music to the ears of a lot more than conservatives. In the medical community, experts were relieved to see that the president’s policy matched what was wise and prudent for patients. In a letter to the departments of Justice, Education, and Health and Human Services, a coalition of doctors, bioethicists, therapists, academics, and policy groups all praised the president for taking a scientifically-sound approach.

Dr. Michelle Cretella, head of the American College of Pediatricians, explained why that’s so important in an interview on Thursday’s “Washington Watch.” The letter, she points out, represents the views of more than 30,000 physicians who all understand that gender identity is a very real threat to modern health care.

“Transgenders are saying, ‘I think and feel this way, therefore, I am.’ And it’s one thing for us to, as physicians, [to] treat the person with respect and honor their name change, but it would be a complete malpractice to treat them as the opposite sex.”

As she explains, there is nothing any of us can do to change our binary, biologically-determined-at-conception sex. “A man on estrogen is not a woman. He is a man with a male physiology on estrogen, and that’s how a physician must approach him.” The very serious problem, she points out, is that people are so ideologically-driven that they want to ignore the medical research.

More than ever, Cretella says, “Medicine is at the point now where we understand that men and women have—at a minimum—6,500 genetic differences between us. And this impacts every cell of our bodies—our organ systems, how diseases manifest, how we diagnose, and even treat in some cases.”

Treating a person differently based on their feelings isn’t just harmful, she argues, but deadly. In cases like heart disease, certain drugs can endanger women and not men. Even diagnoses present differently in men and women. The symptoms for certain diseases, she explains, can manifest themselves in completely opposite ways. “And these are nuances that medicine is finally studying and bringing to light. And it’s actually ironic that the transgender movement [is] so anti-science.”

“There is absolutely no rigorous science that has found a trait called ‘gender identity’ in the brain, body, or DNA. Now sex—I can show you that. It’s in our chromosomes. It’s in the body. It’s in the reproductive organs. Over 99.98 percent of the times, our sexual development is clearly and unambiguously either male or female.” The sex differences, she explains, are real and consequential.

If she had one message for America, Cretella said, it would be this: “Stick with science.” Thank goodness for us, the president has.