Podcast: What It’s Like in France, Amid Heated Protests Over Green Tax 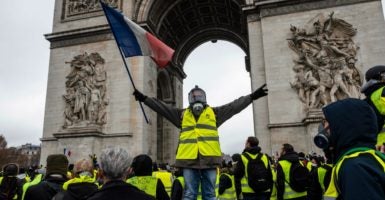 A man wearing a gas mask waves the French flag as a sign of victory on Dec. 1 as part of a protest. (Photo: Karine Pierre/ZUMA Press/Newscom)

Alexandre Pesey has been to some of the “yellow jacket” protests going on in France right now over a fuel tax designed to promote green energy policies. Pesey, director and co-founder of the Institut de Formation Politique (the Institute of Political Formation), a nonprofit that trains young people in France, joins us to discuss what’s really going on in France—and whether it means the country could be moving to the right. Plus: Apple CEO Tim Cook says companies must live by their values, but does that have concerning implications for conservative speech online?