How Trump Can Get Over the 50% Hump 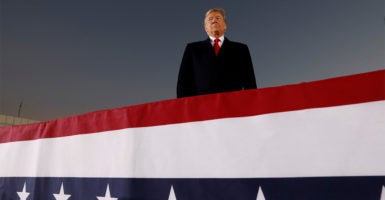 President Donald "Trump's message should be that his economic agenda is aimed at ensuring that minority workers regain some clout over employers," Victor Davis Hanson writes. (Photo: Kevin Lamarque/Reuters/Newscom)

President Donald Trump’s challenges are not really his economic policies and foreign affairs agendas. For the most part, they are supported by the American people and are resulting in prosperity at home and security abroad.

No nation can remain sovereign and secure with insecure borders. There are few ways to stop massive illegal immigration other than building a wall, insisting on employer sanctions, and re-calibrating legal immigration to be measured, diverse, and meritocratic.

For all the hysteria over Trump’s foreign policy, many observers quietly concede that the U.S. is far tougher on Vladimir Putin and Russia now than Obama was in 2016: stronger sanctions, more help to the Ukrainians, and greater NATO expenditures.

America had reached a point of no return with China. It either had to renegotiate its enormous trade imbalances and confront regional Chinese aggressions, or simply acquiesce to China’s agenda of predetermined global superiority.

Yet there were few levers other than temporary trade tariffs to force China to trade equitably and to follow global commercial norms.

The status quo that Trump inherited with North Korean nuclear-tipped intercontinental missiles was an unsustainable proposition. So was an Iran deal that would have guaranteed eventual Iranian nuclear capability.

Yet Trump cannot consistently reach 50 percent approval in the polls. And, like most presidents, he experienced a rebuke in the House during his first midterm elections.

He needs to pick up more minority voter support, perhaps winning about 20 percent of the African-American vote and 40 percent of the Hispanic vote. That is a difficult proposition for any Republican in general, and in particular Trump, who is loathed by Democratic and identity politics activists.

Yet Trump’s economic policies have achieved record-low minority unemployment. His immigration policies will eventually curb illegal immigration and give clout to entry-level workers, who will have less competition from imported low-wage labor.

Trump should go into minority communities and hold frank discussions with local leaders, many of whom oppose him politically, about policies geared toward economically empowering inner-city youth.

Trump’s message should be that his economic agenda is aimed at ensuring that minority workers regain some clout over employers. In a growing economy short of labor, those who were once bypassed and ignored now for the first time in decades have the ability to choose from among multiple job options and enjoy rising wages.

Trump also must pick up 5 percent to 10 percent more of suburban centrists and Republican voters, many of whom privately support the Trump agenda but publicly recoil at Trump’s sometimes blunt (though usually accurate) assessments of political opponents, celebrities, and foreign nations.

The obvious complaint among these swing voters is not so much with Trump’s substance as with his style—which nonetheless appeals to millions in the Trump base who are sick and tired of political hedging and politically correct sentimentalism.

Referring to opportunist Stormy Daniels as “horse face” or to often erratic Rep. Adam Schiff, D-Calif., as “Little Adam Schitt” is unnecessary to secure a base already appreciative of the fact that Trump has done what he said he would do while on the campaign. His gratuitous slurs of enemies turn off voters who otherwise appreciate the security, prosperity, and confidence that Trump has returned to America.

In this regard, Trump is at his best when he is funny and self-deprecating—attributes that play especially well in suburbia.

During the Brett Kavanaugh Supreme Court confirmation circus, an all-too-human Trump joked, “I never had a glass of alcohol. I never had alcohol, for whatever reason. Can you imagine if I had? What a mess I would be. I would be the world’s worst.”

When Trump campaigns and holds rallies, he is the rare politician who sincerely uses a plural possessive pronoun of endearment to talk of Americans as “our farmers,” “our soldiers,” “our miners,” and “our workers.”

His speeches about reviving the de-industrialized Midwest show more empathy than the usual boilerplate from free-trade libertarians or social-welfare liberals.

Trump does not have to win over all minority voters and suburbanites. He just needs to re-calibrate his messaging and re-emphasize his solid achievements, reminding those he has benefited why and how he has helped them—and why he is not the ogre so often stereotyped in the media.

Otherwise, Trump will end up getting results without getting political credit for them.