Abortion in US Reaches Lowest Level on Record, Report Finds 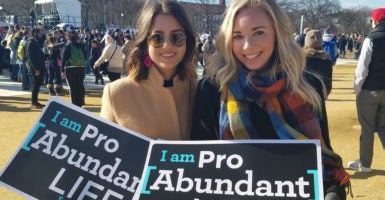 The year 2015 saw the lowest number of abortions on record, according to a new report by the Centers for Disease Control and Prevention. Pictured: Pro-life activists at the January 2018 March for Life rally in Washington. (Photo: Willie Deutsch/CrowdSpark/Newscom)

The pro-life movement had a good year in 2015: Fewer American women reported having abortions than at any other time since abortion was legalized in the U.S., according to a new government report.

Using the most recent data available, the abortion surveillance report published Wednesday by the Centers for Disease Control and Prevention shows 638,169 abortions were reported in 2015, a 2 percent drop from the 652,639 abortions reported in 2014.

“This is welcome news. Medicine and technology continue to shape how we view children in the womb and underscores their undeniable humanity,” Melanie Israel, a research associate in the DeVos Center for Religion and Civil Society at The Heritage Foundation, told The Daily Signal.

CDC began surveillance of legal induced abortions in 1969 and compiles voluntarily reported state data to produce national estimates every year since 1988, according to the agency’s website.

The number of legal abortions skyrocketed in the years following the Supreme Court’s 1973 ruling in Roe v. Wade, which legalized abortion across the country. This trend reached its climax in the 1980s. Since then, the annual number of abortions has been decreasing slowly, rising only slightly between 2006 and 2008 but continuing its downward trend to today.

The CDC report did not indicate a reason for the decline in abortions, but Heritage’s Israel said improved access to pregnancy resource centers and new legislation at the state level likely contributed.

“Thousands of pregnancy resource centers across the country provide services, education, supplies, counseling, and compassionate options—including adoption—to women experiencing tough pregnancies who may feel that abortion is their only choice,”  Israel said in an email to The Daily Signal. “Pro-life legislators across the country are elected to office and pass legislation that protects the health and safety of women and their unborn children.”

The report did not contain data from California, Maryland, or New Hampshire, which opted not to participate.

The report also did not present information about deaths from complications arising from legal abortion in 2015; officials reportedly are analyzing that information.

Six women died as a result of undergoing legal, induced abortion in 2014, according to that year’s surveillance report.