In Saying the ‘American Dream’ Is Alive in China, New York Times Shows Its Misunderstanding of Our Nation 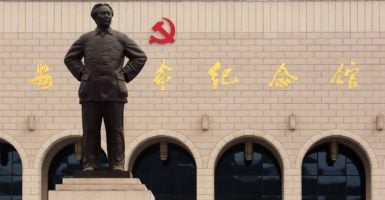 Most Americans are innately offended by authoritarian regimes. But not The New York Times—the newspaper of record, once again, has painted a glorified picture of a communist dictatorship.

The latest example is a series of interactive articles that praise and celebrate the rise of China. One piece was actually titled “The American Dream is Alive. In China.”

The series extols China’s growth in wealth over the last few decades—but amid the adulation, something was noticeably missing. The Washington Free Beacon’s Matthew Continetti hit the nail on the head.

The word 'freedom' does not appear in this article. https://t.co/x1nEkcaUdn

Continetti also noted that China’s young adults can’t even read about how wonderful they are doing because internet censors in the authoritarian regime block information coming from American sources.

Freedom of speech and access to information are just some of the few cornerstone freedoms that are highly restricted under the Chinese regime.

A dystopian “social credit” system is on the way in China that will monitor everything its subjects do—with rewards for “good” behavior and penalties for “bad” behavior. This opens up a new potential for control over public life that was hardly imaginable in even the most repressive tyrannies of the past.

And China is not just creating this Orwellian system for its own people—it is trying to export it elsewhere.

Of course, “bad” behavior includes any speech or activity seen as critical toward the government. The economic prosperity that the Times article celebrates only comes through the good graces of the regime.

The dream begins and ends with the state.

This exclusion and repression includes entire groups of people whose only crime is having the “wrong” ideas.

BBC reported in October how millions of Muslim Uighurs in Xinjiang province have been placed in massive re-education camps—a modern Gulag Archipelago.

Olivia Enos, an Asian Studies Center research associate within the Davis Institute for National Security and Foreign Policy at The Heritage Foundation, wrote in July:

This is hardly something Americans should rush to embrace. Instead, it should lead us to reassess the notion that there was some kind of “end of history” when the Soviet Union collapsed.

The end of the Cold War was certainly a triumph for free people everywhere and clear evidence that capitalism is superior to communism.

However, the fall of the USSR—as great a victory as that was—did not end the recurring conflict between freedom and tyranny, or guarantee the universal embrace of representative government and preservation of God-given rights.

It may have even made us less alert to encroaching despotism.

The New York Times piece missed a key aspect of the American dream: that it is not just about the accumulation of wealth. Our prosperity is the byproduct of a system of order and liberty, provided by the Constitution, which protects the cornerstone freedoms that we hold dear: the freedom of religion, the freedom to associate and protest government and unjust laws, the freedom to protect and defend oneself and one’s community.

Fostering these rights, among many others, are what have made America a beacon of light to the world.

A rich man who must fear practicing religion under threat of imprisonment, who may arbitrarily be placed in a reeducation camp because of his religious or political views, and who does not even have power over the most fundamental decision of bringing life into this world is not a free man—and hardly living the “American dream.”

He is a man living under the very kind of arbitrary government that the Founding Fathers rebelled against, that anti-slavery advocates like Abraham Lincoln worked to end, and what generations of Americans opposed in the 20th century following the rise of fascism and communism.

The unique system that developed in the United States was built around concepts of consent, on the idea that the state is not the bearer of all “truths,” and that we are born free and equal with inalienable rights that must not be infringed.

While America has not always lived up to these ideals, they are worthy and timeless goals that make America not just a great, but a good country.

Our challenge in the 21st century is the same as in previous centuries. We have a choice to make: Do we still hold on to the timeless truths of our founding, or have we lost faith in the ideas that led us to become the most powerful and prosperous country on earth in a historical blink of an eye?

Perhaps many today—including distinguished journalists for The New York Times—forget how some Americans in a previous era looked longingly at authoritarian governments with envy and saw them as a glorious road to the future.

The potential for arbitrary governments to lord power over their citizens presents a far deeper threat to liberty than “fake news,” or the apparent chaos that comes through the freedom of speech and association.

As the playwright Joseph Addison wrote in “Cato: A Tragedy,” one of George Washington’s favorite plays:

A day, an hour, of virtuous liberty

Is worth a whole eternity in bondage.

This is the seed of the American dream, of a people who—despite the material reward of life under British rule—refused to accept the chains of autocracy in exchange for temporary comfort.

As the liberal newspaper of record wistfully depicts a nation that values material prosperity over genuine freedom, Americans would be wise to be cautious.

Instead of glorifying autocracy, we should re-examine the traits that have made us not just powerful and fantastically wealthy, but exceptional—a place where the common man and woman can make their way without violating the dictates of their conscience, without pleading with the state for scraps beneath the table of all-powerful authorities.