She Opposes Israel at Every Turn. Now, She’s Going to Congress. 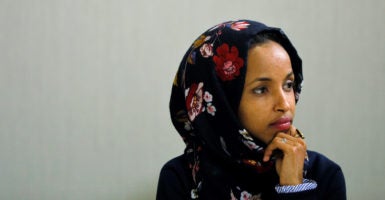 Ilhan Omar, one of the first two Muslim women to be elected to Congress, is a new kind of politician. She’s telegenic, ideologically progressive, widely celebrated by a media that’s obsessed with identity politics.

She’s the kind of politician who can openly side with Hamas against Israel or spread “Protocols of the Elders of Zion”-style conspiracies on Twitter, claiming that Jews possess the supernatural ability to hypnotize the world as they unfurl their “evil.”

It’s not surprising, then, that Omar also supports the “boycott, divestment, and sanctions” movement. In a statement to the website Muslim Girl, someone on Omar’s staff explained that yes, “Ilhan believes in and supports the BDS movement, and has fought to make sure people’s right to support it isn’t criminalized. She does, however, have reservations on the effectiveness of the movement in accomplishing a lasting solution.”

So although Omar contends that BDS will be ineffective in getting the sides to “a lasting solution,” she still “believes in and supports” a movement that smears the Jewish state as a racist endeavor and aims to destroy it economically.

Is it a mystery why some Jews might find that positioning offensive?

Omar has supported BDS for a while, even though she will now occasionally slip in some platitudes about the peace process. As Scott Johnson of Power Line points out, Omar misled Jewish voters in her district, obfuscating about her position and, as she still does, conflating her support for BDS with a bill that would have stopped continued taxpayer funding of the movement.

No one is attempting to “criminalize” anti-Israel speech, although it’s heartening to see that Omar is a free speech absolutist. We’ll see whether her position on the “criminalization” of speech will remain consistent moving forward.

As far as I know, not even outgoing Rep. Keith Ellison, D-Minn., who once accused the shifty Jews of running American foreign policy, has openly supported the BDS movement. Not even J Street, the progressive front for hard-left activists posing as Israel supporters, has openly backed BDS. Nor has George Soros, although he has intermittently funded BDS groups in the past and has been active against the Jewish state for years.

Of course, BDS proponents will tell you they are anti-Zionist, not anti-Semitic. But when you are fixated on the only liberal state in the Middle East and avoid criticism of any Islamic regimes that deny their own citizens the most basic of human rights, you, at the very least, betray a morally bankrupt position.

Even as Hamas rains hundreds of rockets down on civilians—a nihilistic project that always takes precedence over investing in its own people in its own autonomous Palestinian territory—there is criticism from those who only see evil behind Jewish acts of self-defense.

It’s no mistake that Omar insists Israel is an “apartheid regime,” an ugly, simplistic, misleading, and irresponsible accusation. It’s not only the propellant for anti-Semitism on campuses across the country but also the foundational accusation of the BDS movement, which is attempting to re-create the campaign against racist South African apartheid in the 1980s.

Israel’s laws, of course, make absolutely no distinctions based on a person’s race. Every person in Israel has the ability to participate in the democratic process, and all have equal standing under the law. Muslims in Israel have more liberal rights than Muslims anywhere in the Arab world do.

What we do have is a complex situation involving onetime Jewish land that once again fell under Israeli rule after a bunch of neighboring countries tried to destroy it.

Yet Democrats, who claim to hear anti-Semitism dog whistles from every porch in red America, rarely see a problem with this kind of rhetoric. The FBI says that Jews were the victims of 60 percent of religiously motivated hate crimes in 2017, although they are just 2 percent of the population.

Whatever inherent flaws exist in these self-reporting statistics, the disparity is real. Despite the horrific shooting in Pittsburgh and Jew hatred on the far right, it’s almost certain that the average American Jew is likelier to encounter an aggressively “anti-Zionist” BDS activist on a campus (or at a progressive march) than to come across a white supremacist anywhere.

Just ask Tamika Mallory or Linda Sarsour or Sophie Ellman-Golan as they simultaneously infantilize and radicalize mainstream left-wing politics. Not a single Democratic Party leader has condemned their ugly rhetoric or relationship with hatemongers or their insistence on singling out the one country that happens to be filled with Jews.

Then again, not one Democrat has condemned Omar for comparing the Jewish state to a racist regime.

Fortunately, not everyone is consumed by sheer political expediency.