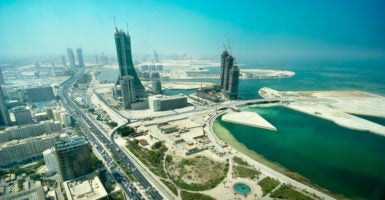 The Senate is set to vote Thursday on a measure to block U.S. arms sales to Bahrain. (Photo: FrankvandenBergh/Getty Images)

The Senate is set to vote Thursday on a resolution of disapproval that would block the sale of what advocates describe as “offensive weapons” to Bahrain, an important U.S. ally that faces deadly threats from Iran.

Advocates of the ban argue that this denial would somehow ease the humanitarian suffering in Yemen. In reality, it will have no such impact and would produce a host of unintended consequences.

Yemen has been engulfed in a slow-motion civil war for more than a decade. That war has accelerated in recent years due to Iranian military support for the Houthi rebels, which provoked a 2015 military intervention by a Saudi-led Arab coalition.

The Houthi militia, a radical Shia group that increasingly has fallen under Iran’s baleful influence, has inflicted humanitarian suffering on its Yemeni opponents and continues to launch Iranian-supplied ballistic missiles at civilian targets in Saudi Arabia and the United Arab Emirates.

Advocates of the arms cutoff apparently believe that they can somehow “end” the war through a one-sided strategy of depriving America’s allies of U.S.-provided weapons. But this is not a one-sided war.

Iran and its Yemeni allies have a vote, and clearly intend to keep fighting against Yemen’s government

It is delusional to think that the Yemenis, who have been fighting for years, will end the bloodletting because Bahrain, a minor member of the Saudi-led coalition, has been singled out for a humiliating arms cutoff.

The war will go on, with or without U.S. weapons.

But depriving Bahrain of arms that it requires for its own defense will undermine U.S. national interests by weakening ties to a major non-NATO ally, giving a psychological boost to Iran, and encouraging the Houthis to continue to drag their feet on peace talks.

The Trump administrating has made it clear that its main priorities in the Middle East are to stop Iran from getting a nuclear weapon and to curtail its malign influence in the region.

In addition to increasing sanctions and bringing debilitating economic pressure on Iran, the administration needs to work on improving and deepening bilateral security relationships in the region—especially with the Gulf States.

Bahrain is a key U.S. ally. First and foremost, it is home to the U.S. Navy’s Fifth Fleet, and the U.S. has maintained some kind of naval presence in the country since 1958. All U.S.-led maritime operations from the Horn of Africa to the Arabian Sea are controlled out of Bahrain.

Some 7,000 U.S. military personnel are based in Bahrain. In addition to the large Navy presence, a significant number of U.S. Air Force personnel operate out of Shaykh Isa Air Base, where F-16s, F/A-18s, and P-3 surveillance aircraft are stationed. The deep-water port of Khalifa bin Salman is one of the few facilities in the Gulf that can accommodate U.S. aircraft carriers.

Bahrain has also showed that it is willing to step up to the plate when it comes to its own defense and security. It has led the Combined Task Force-152—which is a multilateral naval operation in the Gulf—on numerous occasions. When it is not commanding the task force, it provides ships to the operations. Bahrain has also deployed troops as part of the U.S.-led coalition in Afghanistan.

Bahrain—like the internationally recognized government of Yemen, which the U.S. supports against the Houthi rebels—faces significant threats from Iran.

Since Iran’s 1979 revolution, the Tehran regime has sought to overthrow Bahrain’s pro-Western monarchy and replace it with an Islamist dictatorship. Some revisionist hardliners in Iran argue that Bahrain is a lost province of Iran because it once was part of the Persian Empire.

Iran sponsored a failed coup against Bahrain back in the 1980s, and recently stepped up its long-standing efforts to radicalize the Shiite majority living under Bahrain’s Sunni-led government.

Tehran has backed Islamist groups such as the Dawa Party in Bahrain and trained militants from Bahrain in camps in Iraq. It has been caught red-handed sending arms to terrorists in Bahrain, including sophisticated bombs called explosively formed penetrators that were responsible for the deaths of several hundred U.S. troops in Iraq, and now threaten Bahraini security forces.

If there is a link between Bahrain and Yemen, it is that both are threatened by Iran. Yet advocates of blocking defense sales to Bahrain ignore this link and prefer to focus on penalizing U.S. allies.

What is needed is stronger action against Iran—not misguided efforts to end wars by abandoning our allies.

Chaos Will Erupt in the Middle East If U.S. Leaves Yemen
Why the Crisis in Yemen Matters to the United States
Why the Arms Trade Treaty Is No Answer for the Saudi Problem
Treat Bahrain Like an Ally
Iran’s meddling makes Yemen regional flashpoint
U.S. Iran Policy After the Demise of the Nuclear Deal