A Day to Honor All Who Have Served 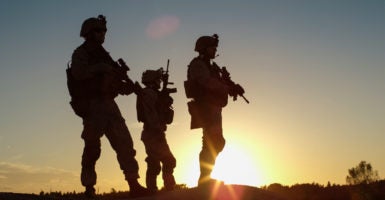 "Veterans Day does not celebrate war in any way. It celebrates service to country, and willingness to sacrifice for one’s fellow man," writes Steve Bucci. (Photo: gorodenkoff/Getty Images)

Our national holiday of Veterans Day did not start with that name.

In 1918, on the 11th hour of the 11th day of the 11th month, hostilities on the Western Front ceased and World War I came to an end. That day became internationally known as Armistice Day.

But the name eventually changed in the United States, and there has been some controversy and confusion ever since.

Armistice Day was designed to help us remember the horrors of the First World War and to keep us from repeating the massive conflict. That was a nice thought, but clearly it did not do what was intended.

The “war to end all wars” did not do so, and after a period of relative peace, mingled with the Great Depression, the world was once again at war, this time on a scale that dwarfed World War I and really did encompass “the world.”

The Korean War followed on the heels of World War II before all the mobilized forces had been completely separated, and once again, U.S. troops were fighting to secure the freedom of others.

No one should ever discount the impact of WWI and the sacrifices of those who fought in that horrific war. The move to alter the focus of Armistice Day did not intend that at all.

In the 1950s, the people of Emporia, Kansas, recognized that America now had an entirely new group of young men and women who had sacrificed in two additional wars, and they wanted to honor and remember their sacrifices as well.

Veterans Day does not celebrate war in any way. It celebrates service to country, and willingness to sacrifice for one’s fellow man. It is not just a day to thank vets, it is a day to thank the Lord that some people have in their hearts the courage to stand between innocent people and evil, whatever its origin.

As you consider the meaning of Veterans Day and its origins, remember the words of Gen. Douglas MacArthur in his final speech to the Corps of Cadets at his beloved West Point: “The soldier above all others prays for peace, for it is the soldier who must suffer and bear the deepest wounds and scars of war.”

Thank the vets you meet, and understand that there is much they have given that you might never understand—and then appreciate their willingness to serve.