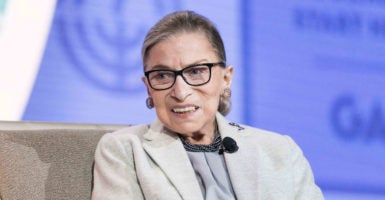 The health of 85-year-old Justice Ruth Bader Ginsburg, a progressive favorite, is much-watched. The justice was seriously injured in a Wednesday evening fall in her chambers. (Photo: Michael Brochstein/ZUMA Press/Newscom)

Justice Ruth Bader Ginsburg was seriously injured in a Wednesday evening fall in her chambers at the U.S. Supreme Court.

The health of the 85-year-old justice and progressive favorite is much-watched, lest a sudden change of events give President Donald Trump a third appointment to the high court.

“Justice Ruth Bader Ginsburg fell in her office at the court last evening,” the Supreme Court public information office said Thursday morning. “She went home, but after experiencing discomfort overnight, went to George Washington University Hospital early this morning. Tests showed that she fractured three ribs on her left side and she was admitted for observation and treatment. Updates will be provided as they become available.”

The injury precluded Ginsburg from attending Thursday morning’s ceremonial investiture of Justice Brett Kavanaugh, who was confirmed on Oct 6. Trump, the first lady, various administration officials, federal judges, and other well-placed members of Washington’s legal establishment are expected to attend.

Tuesday’s fall was not Ginsburg’s first. In 2012 she fell and broke two ribs, an injury that went undisclosed for some time. The justice has also been treated twice for cancer. In 1999 she famously endured a battery of radiation and chemotherapy for colon cancer without missing any official business. A decade later in 2009, she underwent surgery for pancreatic cancer.

Ginsburg is the high court’s oldest member. Her health is a continued source of anxiety for progressives. Ginsburg tends to dodge inquiries as to her well-being, insisting she will serve for as long as she is able.

The justice meets twice weekly with a personal trainer who tailors a fitness regiment to meet her unique needs. The trainer, Bryant Johnson, published a fitness and training book called “The RBG Workout” in 2017.

While small and hunched in stature, she remains a sharp, engaged presence during oral arguments and continues to produce opinions at a fast pace. The high court released its first opinion of the current term Wednesday, in which Ginsburg wrote the controlling opinion for a unanimous court. It was the third consecutive year that Ginsburg completed the first opinion of the term.

Speaking to reporters Thursday morning, White House counselor Kellyanne Conway said Ginsburg would be in her prayers, and praised her fortitude.

“I’ve known her for many, many years,” Conway said. “I got to see her just a few weeks ago here at the swearing-in of Justice Kavanaugh. I hope she has a full and speedy recovery.”