In 1919, Mothers Designed a Cross to Remember 49 Veterans. Now the Supreme Court Will Decide If It’s Constitutional. 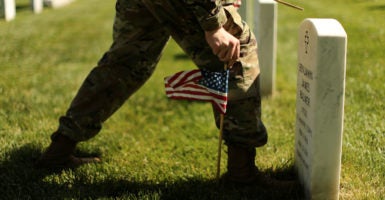 A U.S. Army soldier of the 3rd United States Infantry Regiment uses his boot to measure where to place U.S. flags on graves at Arlington National Cemetery on May 24. An upcoming Supreme Court decision could affect the two World War I crosses in the cemetery. (Photo: Jonathan Ernst/Reuters/Newscom)

They came from many walks of life, the 49 boys of Prince George’s County, Maryland.

Several were laborers like George Washington Farmer and William Lee—one white, the other African-American. One, Ernest Pendleton Magruder, was a well-known surgeon. Another, Henry Lewis Hulbert, a Medal of Honor recipient of a previous war, would again display such bravery that he would earn a Distinguished Service Cross.

Educated or not, white or black, rich or poor, their diverse backgrounds mattered little as they died on foreign soil in the final months of the “war to end all wars.” Their bodies were interred under small grave makers, including crosses, in cemeteries far too distant for their families to ever visit.

So, in 1925, a local post of The American Legion—now the largest veterans service organization in the country with approximately 2.2 million members—erected the Bladensburg World War I Veterans Memorial to honor the 49 Bladensburg-area men who gave their lives serving in the U.S. Armed Forces during World War I.

But the cross-shape of the monument is too much to bear for some humanists, who have sued to have the memorial deemed unconstitutional.

Late last year, the U.S. Court of Appeals for the 4th Circuit agreed with those who would erase the memory of the service and sacrifice by these 49 service members, concluding that the presence of the nearly 100-year-old cross-shaped Bladensburg memorial violates the U.S. Constitution’s “establishment clause.”

On behalf of The American Legion, my firm, First Liberty Institute, and our network attorneys at the international law firm Jones Day, appealed that ruling to the U.S. Supreme Court. Last Friday, the justices announced that they will hear the appeal.

I think the Gold Star Mothers who designed the Bladensburg memorial in 1919 would be pleased. They chose the shape of the memorial to recall the crosses marking the countless American graves on the Western Front of that war.

Surely the Constitution permits Gold Star Mothers to erect a simple memorial that mirrors those that marked the graves of their sons buried on the battlefields of Europe.

If this memorial is desecrated or bulldozed to the ground, it’s only a matter of time before the wrecking ball turns on the two World War I crosses in Arlington National Cemetery and the perhaps hundreds of other memorials across the country. Such an outcome would be tragic not only for the families of those honored, but for our nation as well.

This Sunday, Nov. 11, marks the 100th anniversary of the armistice, the official end of WWI. Perhaps many Americans are unaware of what happened at the eleventh hour of the eleventh day of the eleventh month, other than to know it’s Veterans Day. Such is the case in our history-challenged culture.

But the mere fact that Americans have forgotten our history is precisely why memorials like Bladensburg must be preserved: we forget what we do not see.

On the sixth anniversary of his death, the family of John Henry Seaburn, one of the African-American soldiers from Prince George’s County who died on the other side of the world, memorialized him in the Washington, D.C., Evening Star, with the poetic lines:

We cannot hear your loving voice,

Your smiles we cannot see;

But let this little token show

Forget you? No, we never will.

The Gold Star Mothers and The American Legion who erected the Bladensburg World War I Veterans Memorial to the 49 sons of Prince George’s County did so knowing that we would forget the service of their sons and husbands unless the living honored their sacrifice.

The U.S. Supreme Court is the last hope for preserving the Bladensburg World War I Veterans Memorial, ensuring we will be able to continue to remember the valor, endurance, courage, and devotion of the boys of Bladensburg.