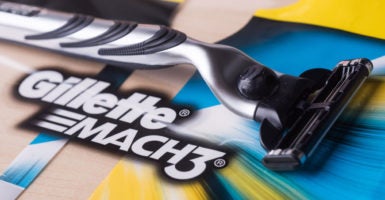 A razor from a razor set of Gillette "Mach3" can be seen in Hamburg, Germany, in 2017. Procter & Gamble’s popular Gillette and Venus razors need high-quality razor steel, much of which must be imported from Japan and Europe, as such steel is not supplied domestically. (Photo: Christophe Gateau/dpa/picture-alliance/Newscom)

“Buy American” is a popular slogan with a lot of appeal for the American public.

Its focus on U.S.-made goods seems to emphasize our country’s jobs and economic stability.

But “Buy American” policies may not always make America’s economy great again, as they have the ability to thwart the dynamic gains from international trade—a key benefit of economic freedom.

Recently imposed tariffs on steel and aluminum are one of the latest examples of policies intended to compel Americans to “buy American.” Unfortunately, the tariffs—as with any other government intervention in the economy—can have unintended consequences.

Procter & Gamble’s popular Gillette and Venus razors need high-quality razor steel, much of which must be imported from Japan and Europe, as such steel is not supplied domestically.

Thankfully, Procter & Gamble has dodged that bullet for now. The company was recently granted an exemption to the costly 25 percent tax on imported steel.

Employees of steel-using industries, including some of the 92,000 P&G employees, could be considered front-line troops of the trade war, a war unfortunately manifested primarily (and surprisingly, to many) in conflict between American companies and the American government.

Like Procter & Gamble, many other American companies are fighting the American government for exemptions from its harmful protectionist policies.

Economic policy founded in protectionist principles, while well-intentioned for some sectors, has the power to stifle American progress in other parts of the economy.

Dynamic economic growth depends not only on preserving a competitive, transparent business climate, but also on ensuring the open markets on which so much of America’s prosperity has been built.

Tax cuts and deregulation have been generating strong economic growth of more than 3 percent in recent quarters.

The U.S. economy can grow even more if tariffs are lowered and protectionist policies get dismantled.