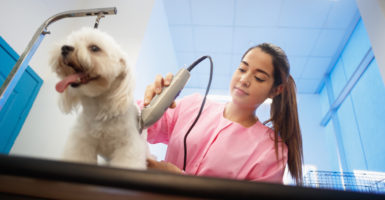 The legislation cleared a key hurdle last week when the New Jersey General Assembly approved Assembly Bill 3044, named “Bijou’s Law” after a Shih Tzu who died during a grooming. The bill now moves to the Senate for further deliberation.

As Chicago Mayor Rahm Emanuel once said, “You never want a serious crisis to go waste.” A crisis creates an “opportunity to do things that you think you could not do before.”

We love dogs, but it takes Emanuel’s unique sense of opportunism to see the sad death of a dog as justification for a state “Board of Pet Groomers.”

The likely effect of this board would be to make it harder for people to become groomers, and to make grooming more costly for pet owners. Meanwhile, established practitioners will reap the rewards that flow from higher prices and reduced competition.

Four years have passed since Democratic Assemblywoman Valerie Vainieri Huttle first introduced Bijou’s Law. The idea behind the bill, as Bijou’s owner Rosemary Marchetto said in committee testimony, is to have mandatory licensing requirements for all pet groomers in New Jersey and in every other state.

After the bill died in 2014, Huttle reintroduced it in 2016, when it stalled in the Regulated Professions Committee, and reintroduced it again in 2018, after the post-grooming death of Scruffles, an 8-year-old bulldog.

New Jersey Advance Media investigated the allegations of grooming-related deaths—particularly those associated with the retail chain PetSmart—and identified 47 documented cases across 14 states since 2008.

Twenty of those 47 cases involved brachycephalic dogs: flat-faced, short-nosed dogs, including bulldogs like Scruffles and Shih Tzus like Bijou, which are known to have breathing issues.

But only nine of those cases occurred in New Jersey.

Each of those individual pet owners could sue the pet groomer, and possibly settle out of court as Marchetto and other pet owners have.

For its part, PetSmart has denied any wrongdoing and released a statement claiming that it has the “highest grooming safety standards in the industry.” Its “stylists complete 800 or more hours of hands-on instruction and safety certification, working with at least 200 dogs of all breeds and sizes,” and they “complete annual safety re-certification and participate in quarterly grooming safety training sessions.”

How does the New Jersey General Assembly plan to top that?

First, the bill would prohibit licensing anyone under 18 and anyone who lacks “good moral character”—a phrase that appears in many occupational licensing schemes, and often bars individuals with a criminal record from obtaining gainful, lawful employment.

The basic language of Bijou’s law—“[n]o person shall practice … pet grooming unless that person is licensed [under this act]”—could be read to prohibit people from bathing or brushing their own dogs without a license. The bill provides specific exemptions from the licensing requirement, but only for students of board-licensed pet grooming schools, supervised trainees of licensed groomers, and individuals grooming their pets in preparation for a dog or cat show “or other competitive event.”

The bill would also force would-be pet groomers to pass a written test, complete a “practical demonstration,” and pay a $75 licensure fee.

Once licensed, groomers would have to pay a $50 license renewal fee every two years, complete any continuing education requirements that the State Board of Pet Groomers may require, and follow state grooming regulations—including reporting any injuries, illnesses, deaths, or escapes to the board.

Colorado has a similar reporting requirement for pet groomers, and the state issues licenses for animal care facilities, but it does not impose costly prerequisites for each individual groomer to work.

Thus, Colorado’s law is more in line with recommendations from the Obama White House to “[limit] licensing requirements to those that address legitimate public health and safety concerns to ease the burden of licensing on workers.”

On his last day in office, former New Jersey Gov. Chris Christie did just that by blocking the enactment of proposed licensing requirements for dance and drama therapists, music therapists, and anyone in the business of “building, installing, repairing, or maintaining a pool or spa.”

Nick Sibilla of the Institute for Justice, a nonprofit law firm, notes that “[l]icensing reform is the rare issue where both the Obama and Trump administrations have found common ground. Americans should spend their time earning a living, not earning a license.”

Here’s hoping that New Jersey and other states keep moving forward, not backward, on this important issue.