What’s at Stake in Rebuilding the Military 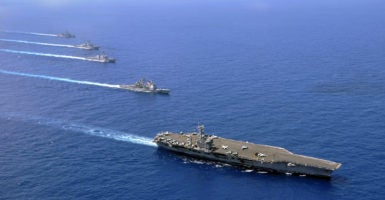 We place a lot of demands on our fine military, and the good news is—at home and in many places around the world—it’s meeting those demands.

Now the bad news: We’re wearing it out. After 17 years of continuous combat operations, it’s in desperate need of a rebuild.

To be sure, Congress recently provided some welcome additional funding. That money has enabled the services to make progress in reducing maintenance backlogs, replenishing depleted inventories of repair parts and munitions, and regaining some measure of readiness for larger-scale conventional operations.

The new worry, however, is that folks will think the hard part is over—that our forces are, or will soon be, where they need to be. Nothing could be further from the truth.

Our military must overcome a generation of experience dealing with terrorist groups and non-state irregular forces, challenges that are dramatically different from what it’s faced in the past and may face again in the future: a larger-scale conventional war with a rival major power.

Think about it. The sustained counterinsurgency, counter-terrorism, security/stability, and train/advise/assist missions of the past 17 years haven’t required U.S. forces to deal with an enemy that possesses combat aircraft, a navy of any sort, armored formations, missiles, or even multiple-launch rocket artillery. In short, we’re out of practice.

The Army is just now getting a handle on what it will take for its operational units to gain competency in major land operations. It has invested heavily in realistic training for its heavy brigades at the National Training Center at Fort Irwin, California.

That’s good, obviously, but the learning curve has been steep, and they are only now discovering just how far they need to go to regain the big-battle competence of the Army they used to have.

The Marine Corps is wrestling with the implications of a naval campaign against a major competitor like China. Initial insights indicate that its portfolio of ground equipment and weapons, and supporting vessels operated by the Navy, may have to substantially change to be relevant in highly contested waters.

The Air Force is challenged by too few planes and a large deficit in pilots. During the Cold War, pilots would typically need 200 or more training flight hours to be considered competent for the rigors of air battle against their Soviet counterparts. Today, the average fighter pilot gets less than 140 hours per year. F-35A pilots are averaging roughly 75 hours a year.

The Navy has plans to grow its fleet from 285 ships to 355. But it takes time to build ships, even after you get the necessary funding, so we shouldn’t expect this needed fleet to be reached until the year 2050.

By comparison, China is on track to achieve a fleet of 350 ships by 2020. With no reduction in the demand for U.S. navy ships in key seas stretching from the Sea of Japan to the North Atlantic, the Navy is hard-pressed to catch up on years of deferred maintenance, which limits its ability to improve ship availability for the training it needs to prepare for “great power competition” and to slow the aging of the vessels it does have in the fleet.

These are but a sampling of the challenges our military must overcome to be the military our nation needs. Only one-third of American youth are even eligible for military service due to poor health, obesity, criminal records, and substance abuse. The nation’s fiscal condition is saddled with enormous debt (now at $21 trillion) and growing entitlement obligations.

Early debates in Congress about the fiscal year 2020 budget already indicate that current spending on defense may be the ceiling rather than a starting point on which to build.

At some point, Americans will have to make hard decisions about whether to sustain the relentless increases in debt that come from living beyond our means or to discipline “wants” in order to prioritize spending on “needs.”

But time is not on our side, and we certainly do not control the choices being made by our competitors. America needs to get serious rediscovering what it means—and requires—to be a great power.