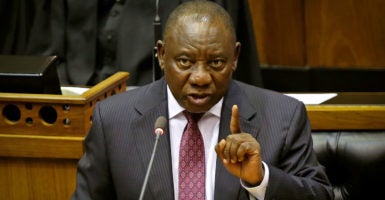 South African President Cyril Ramaphosa speaks in parliament in Cape Town, South Africa, on Feb. 20. He has responded to economic pressures within his country by joining those on the far left in calling for the expropriation of the land of white farmers without compensation. (Photo: Sumaya Hisham/Reuters /Newscom)

Patrick Farrell is a member of the Young Leaders Program at The Heritage Foundation.

Ever since the end of apartheid in the mid-1990s, people have hailed South Africa as a champion in the fight for justice and equality.

In The Heritage Foundation’s 2018 Index of Economic Freedom, South Africa received the designation of “moderately free,” with its freedom score rising 0.7 points, due to significant improvements in investment freedom and judicial effectiveness.

However, this picture could soon change. Since rising to power, South African President Cyril Ramaphosa has responded to economic pressures within his country by joining those on the far left in calling for the expropriation of the land of white farmers without compensation.

This rhetoric should scare anyone who recognizes the importance of private property and economic freedom.

Until recently, the South African stance on government appropriation of land was a “willing buyer, willing seller” policy. However, on Aug. 1, Ramaphosa said that the ruling African National Congress party plans to change the country’s constitution to permit the government to expropriate land without any compensation.

By making it possible for the government to seize land without any such payment, Ramaphosa and the African National Congress are taking dangerous steps infringing on the private property rights of South Africans.

Although Ramaphosa is president of both South Africa and its dominant political party, the man who has added most of the fuel to the fires of land expropriation is Julius Malema.

Malema is a former member of the same political party as Ramaphosa, but was expelled for being too extreme, as well as for committing various crimes.

Malema then went on to form his own political party, the Economic Freedom Fighters, which currently holds 25 of the 400 seats in the South African National Assembly.

The Economic Freedom Fighters calls itself “a radical and militant economic-emancipation movement,” with Malema referring to himself as the commander in chief of the party and the leadership of the party referring to themselves as the central command.

If we are to learn the lessons of history, we should know that radical, militant political parties are not good for a country. Malema has openly said that he wishes to nationalize mines and take the land of white farmers without compensation.

Malema’s most extreme divisiveness, however, comes from allegations that he wishes death upon white farmers. In March 2010, Malema was heard singing the song “Shoot the Boer” on a university campus.

In an article published by The Citizen, a screenshot from Twitter was shown in which Malema responded to accusations that he orchestrates the killing of white farmers by saying “maybe, maybe not.”

Though virtually everyone agrees that killing people because of their race is reprehensible, many people think that the forced redistribution of land and wealth will somehow make everybody better off.

History has shown that free markets, cooperation, and just governance have been far better for all people than the loss of property rights, coercion, and arbitrary governance.

All one has to do is look at the living standards in the developed Western world, as opposed to any country that has experimented with communism.

Heritage’s Index of Economic Freedom has shown repeatedly that people who live in countries with more economic freedom, including property rights, are better off.

Free markets are what allow people to elevate themselves out of poverty and into a comfortable lifestyle. Yet free markets, and thus the unleashing of human ingenuity, will not happen if people have to worry about the government taking away their property.

South Africa’s leadership has two options. They can submit to the idea of land expropriation pushed by demagogic left-wing radicals, or they can embrace their nation’s motto of “Unity in Diversity” and let their citizens determine their own futures, regardless of skin color.

The nation remains at a crossroads. The Index of Economic Freedom ranks South Africa as the fourth-freest nation in sub-Saharan Africa, which means that other countries on the continent likely look up to it as an example.

It would truly be a shame if South Africa chooses to adopt the same coercive policies that have failed in the Soviet Union, Venezuela, Cuba, and Zimbabwe, to name a few.

Instead, Ramaphosa should help the South African people by standing up to the likes of Malema. He ought to respect the economic freedom of South Africans to direct their own lives and to make their own economic decisions, free from the fear of government land confiscation.

Millions of individuals around the world have been able to escape the grinding clutches of economic repression and senseless poverty when they have the type of property rights the South African government today seems all too willing to take away.