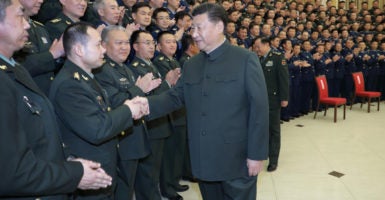 The Chinese have attempted to spy on some 30 U.S. companies, the White House says, also warning that Beijing is meddling with U.S. elections.

Those are among the reasons Vice President Mike Pence amplified the Trump administration’s assertion that it will no longer play nice with the Chinese communist regime.

“Beijing is employing a whole-of-government approach, using political, economic, and military tools, as well as propaganda, to advance its influence and benefit its interests in the United States,” Pence said Thursday, speaking at the Hudson Institute in Washington.

While much of the media coverage of Pence’s remarks focused on election meddling, the vice president also discussed cybersecurity and Beijing’s increasing militarism, and called for American companies to be on guard in dealing with China.

Here are four key threats Chinese policies pose to the U.S., according to the vice president.

The federal contractors included companies that have worked with the Central Intelligence Agency and with the International Space Station.

Microchips, about the size of a grain of sand, were inserted into the manufacturing of equipment in China of Super Micro Computer Inc., which is a server supplier for several major companies in the United States.

Investigators determined the chips allowed attackers to create backdoor entry to alter computers. However, Amazon, Apple, Super Micro itself, and the Chinese government all disputed the Bloomberg reporting.

“This is a backdoor into the hardware level in determining personal identification, health care records, and possibly even voting machines,” Dean Cheng, research fellow on Chinese political and security affairs at The Heritage Foundation, told The Daily Signal.

“If the chip story is true, there is something fundamentally wrong with our supply chain,” he added.

Cheng contends these cybersecurity concerns are far weightier than concerns about election interference and spreading propaganda.

“We’ve taken action to authorize increased capability in the cyber world to build deterrence against our adversaries,” Pence said in his Hudson Institute remarks. He noted that had particular relevance to the host venue.

“After you offered to host a speaker Beijing didn’t like, your website suffered a major cyberattack, originating from Shanghai,” Pence said. “The Hudson Institute knows better than most that the Chinese Communist Party is trying to undermine academic freedom and the freedom of speech in America today.”

China is pushing a propaganda war in the United States, with an eye on both the 2018 midterm elections and the 2020 presidential election, Pence said, regarding Chinese election meddling.

“There can be no doubt: China is meddling in America’s democracy,” he said.

He noted that the U.S. intelligence community says that China “is targeting U.S. state and local governments and officials to exploit any divisions between federal and local levels on policy.”

“When it comes to influencing the midterms, you need only look at Beijing’s tariffs in response to ours,” Pence added. “The tariffs imposed by China to date specifically targeted industries and states that would play an important role in the 2018 election.

“By one estimate, more than 80 percent of U.S. counties targeted by China voted for President Trump and I in 2016. Now, China wants to turn these voters against our administration,” he said.

One example is in the battleground state of Iowa, Pence said:

Last week, the Chinese government paid to have a multipage supplement inserted into the Des Moines Register—the paper of record of the home state of our ambassador to China and a pivotal state in 2018 and 2020. The supplement, designed to look like the news articles, cast our trade policies as reckless and harmful to Iowans.

The United States is limited in its ability to stop China’s propaganda, Cheng said.

“If the argument is that hackers are somehow rewriting stories, or the government is buying off reporters, that would be different, but that’s not the case,” Cheng said. “We have a free press, and anyone can run an ad. So does Saudi Arabia, and so have Europeans. This is not unique to China.

“The focus is misplaced on election manipulations,” he added. “The electoral stuff gets the attention, but there are far more important issues.”

The White House National Security Council referred to Trump’s announcement from Aug. 2 about a new federal government-wide initiative to help state and local authorities bolster their defenses against cyberattacks targeting our elections.

Pence called out Google for its seeming willingness to work with the Chinese government.

“Google should immediately end development of the ‘Dragonfly’ app that will strengthen Communist Party censorship and compromise the privacy of Chinese customers,” he said in his Thursday speech.

“In one recent example, China threatened to deny a business license for a major U.S. corporation if they refused to speak out against our administration’s policies,” Pence said.

However, Pence also said more companies are taking a firmer stance against doing business in China.

As we gather here, a new consensus is rising across America. More business leaders are thinking beyond the next quarter, and thinking twice before diving into the Chinese market if it means turning over their intellectual property or abetting Beijing’s oppression.

Google should employ “truth in advertising,” Cheng said. The company is considering working with China in a way that would censor information negative to the government, and also allow the government to monitor searches.

By contrast, Google has previously declined to renew its contract with the U.S. Defense Department.

“China now spends as much on its military as the rest of Asia combined, and Beijing has prioritized capabilities to erode America’s military advantages on land, at sea, in the air, and in space,” Pence said.

China wants nothing less than to push the United States of America from the Western Pacific and attempt to prevent us from coming to the aid of our allies. But they will fail.

America had hoped that economic liberalization would bring China into a greater partnership with us and with the world.

Instead, China has chosen economic aggression, which has in turn emboldened its growing military.