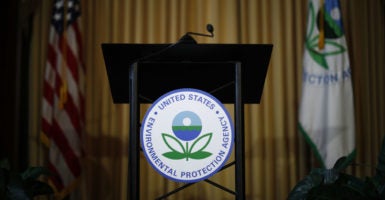 The EPA has found a way to game the regulatory process in order to impose some of the costliest regulations in U.S. history by using the “co-benefits” (i.e., indirect benefits) of emission reductions of another pollutant, fine particulate matter. (Photo: Ting Shen/Reuters/Newscom)

If the Environmental Protection Agency decides to regulate emissions of a specific pollutant, should those emission reductions yield benefits that exceed the costs of doing so?

The commonsense answer to that question is: Of course.

But that’s not how things work with many EPA air pollution regulations. Instead, the EPA has found a way to game the regulatory process in order to impose some of the costliest regulations in U.S. history by using the “co-benefits” (i.e., indirect benefits) of emission reductions of another pollutant, fine particulate matter.

Through the use of these co-benefits, the EPA justifies rules even though there may be little, if any, benefits connected to the purpose of the rule.

Now, the Trump administration and the EPA reportedly are about to do something to curb this abuse.

The EPA is going to recalculate the costs and benefits of a controversial rule known as the Mercury and Air Toxics Standards Rule for Power Plants, the so-called “MATS rule.” As reported, this co-benefits abuse will not be employed in a new cost-benefit analysis.

When the EPA finalized the MATS rule in 2012, it didn’t bother to consider costs when deciding whether to regulate mercury emissions. This led to a Supreme Court case, Michigan v. EPA, challenging the agency’s failure to consider whether the rule was “appropriate and necessary,” as required under the Clean Air Act.

Justice Antonin Scalia, writing for the majority, explained, “[a]gainst the backdrop of this established administrative practice [consideration of cost], it is unreasonable to read an instruction to an administrative agency to determine whether ‘regulation is appropriate and necessary’ as an invitation to ignore costs.”

The EPA did estimate that the annual benefits of reducing mercury emissions was a mere $4 million to $6 million. The estimated costs, however, were $9.6 billion.

As Scalia pointed out, “[t]he costs to power plants were thus between 1,600 and 2,400 times as great as the quantifiable benefits from reduced emissions of hazardous air pollutants.”

As the court succinctly explained, “[n]o regulation is ‘appropriate’ if it does significantly more harm than good.”

The EPA has argued that the MATS rule, though, has co-benefits from reducing fine particulate matter and sulfur dioxide that amount to as much as $37 billion to $90 billion per year.

This abuse of co-benefits allows the EPA to regulate fine particulate matter without ever making the case that regulating the pollutant of concern (such as mercury) is truly warranted.

These co-benefits can become a cover for regulating whatever the EPA wants without ever justifying the regulation of the targeted pollutant, or for that matter, explaining why there are not far better (and direct) ways to address fine particulate matter.

This gaming of the system is misleading to the public. For example, it gives the misimpression that reductions in mercury will yield significant benefits, when in fact, the alleged benefits are almost entirely derived from reductions in fine particulate matter.

Such gaming is also not transparent to the public, and it’s susceptible to double counting of alleged co-benefits.

The MATS rule is not an aberration when it comes to co-benefits abuse.  According to NERA Consulting data, based on 26 EPA regulatory impact analyses of major rules between 1997 and 2011, 21 of the rules derived most of their benefits from fine particulate matter co-benefits.

In six of those EPA analyses (from 2009 to 2011), the co-benefits accounted for all of the benefits.

Fortunately, it sounds like the EPA and the Trump administration are going to address this abuse.

[A]cting Administrator Andrew Wheeler said the EPA is focused on producing analyses that capture the specific impact of a rule—in this case, mercury—rather than the accompanying benefits that stem from installing new pollution controls on equipment.

“I just think it’s a little fuzzy math when you say, ‘Reduce mercury, and we have all these other benefits over here,’ as the shiny object,” Wheeler said, adding that the agency could still consider other benefits, but should categorize them separately.

While concerns over EPA overreach often focus on the agency exceeding its statutory authority, these hidden games that impose billions of dollars in regulatory costs shouldn’t be forgotten.

The EPA should stop this gaming of the regulatory process for all air pollution rules. Congress should pass legislation to that effect.

To its credit, it appears the EPA may be on its way to doing so, and as a result, helping to improve the integrity and transparency of the regulatory process.