Can EPA Ignore Costs of This Very Expensive Regulation? Supreme Court to Decide. 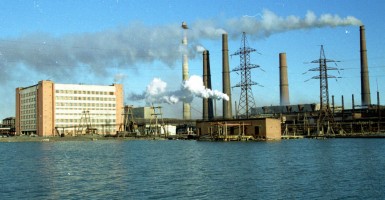 In 2012, the Environmental Protection Agency published its final Mercury and Air Toxics Standards that regulate the emissions of hazardous air pollutants from power plants.

There was one “slight” problem.

By EPA’s own estimates, the economic costs would be $9.6 billion annually, making this one of the costliest rules ever issued by the EPA. This compares to benefits of $4-$6 million annually. But EPA completely ignored the costs when developing these regulations.

Today, the United States Supreme Court heard oral arguments in Michigan v. EPA. At issue is whether the EPA could ignore costs when issuing these regulations under Section 112 of the Clean Air Act.

Under Section 112, which applies to electric utilities, the EPA administrator shall regulate if the regulation is found to be “appropriate and necessary.” The EPA argues that “appropriate” doesn’t have to include costs.

However, it is clear that within the context of the statue what is considered “appropriate” should clearly include costs. There’s nothing more fundamental in making regulatory decisions than evaluating both costs and benefits.

But the agency is justifying the rule on alleged benefits alone, ignoring the requirement that the regulation must be “appropriate.”

Judge Brett Kavanaugh, who wrote the dissent when the case was heard in the DC Circuit Court of Appeals, captured the absurdity of the EPA’s position:

Suppose you were the EPA Administrator. You have to decide whether to go forward with a proposed air quality regulation. Your only statutory direction is to decide whether it is “appropriate” to go forward with the regulation. Before making that decision, what information would you want to know? You would certainly want to understand the benefits from the regulations. And you would surely ask how much the regulations would cost. You would no doubt take both of those considerations—benefits and costs—into account in making your decision. That’s just common sense and sound government practice.

Unfortunately, common sense left the EPA long ago. Even assuming that Section 112 of the Clean Air Act doesn’t require costs, why would the EPA want to develop regulations without considering the costs?

Maybe the EPA knew that with such minuscule benefits, especially when compared to the costs, it would have been very difficult to justify the regulations as being “appropriate and necessary.”

They also may have realized that co-benefits from reductions in PM2.5 emissions (fine particulate matter), which the EPA has been using to justify many regulations, wouldn’t be considered relevant in this situation.

As explained in the petitioners’ brief:

This $9.6 billion in annual costs won’t be borne by electric utilities alone. They will pass on costs to electricity customers. The EPA apparently doesn’t care about lost jobs or the hit to the economy from such massive regulations.

Further, low-income individuals are particularly hit hard when it comes to higher energy prices because compared to higher income groups, a disproportionate share of their income goes to paying energy bills.

The Supreme Court will be determining whether the EPA properly interpreted the Clean Air Act. By the end of June, the Court will have issued its important opinion in this case.

It’s sad though that any agency would even attempt to ignore costs in the first place and deem this to be a proper way to develop policy.