The History Russians and Communists Want Us to Forget 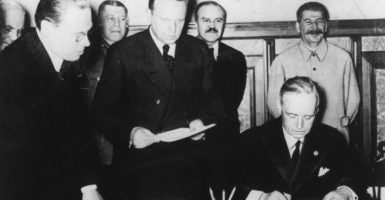 The Molotov-Ribbentrop Pact between Nazi Germany and the Soviet Union allowed those nations to carve up Eastern Europe virtually unimpeded in the early days of World War II.(Photo: akg-images/Newscom)

The Soviet Union did not free the world of tyranny in World War II. It merely helped defeat one evil while ruthlessly attempting to supplant it with another one.

But you wouldn’t know that from reading an Associated Press article from early September.

The Associated Press originally stated that the Soviet Union and Nazi Germany were “allies” at the beginning of World War II. The news service then issued this correction:

In 1939, despite sharp ideological differences, the two powers entered into a non-aggression pact that paved the way for them to carve up Poland and for the Soviet Union to take the Baltic states of Lithuania, Estonia and Latvia. That pact was never formally recognized as an alliance, and in 1941 Germany attacked the Soviet Union.

It’s noteworthy that according to the Israeli newspaper Haaretz, this correction took place after Russia put pressure on the publication. The Daily Signal reached out to AP about the correction, but it didn’t respond to the request for comment.

The truth is that the USSR and Nazi Germany were functionally allies in the early stages of World War II, as historian Timothy Snyder explained in his book “Bloodlands: Europe Between Hitler and Stalin.”

The “sharp ideological differences” between these two merciless systems was perhaps not so sharp in reality. Both stood fundamentally opposed to concepts such as “natural rights” and limited government of the people, by the people, and for the people.

This can be seen in the country of Ukraine, which suffered first under Soviet tyranny, then under Nazi tyranny.

In the 1930s, the Soviet Union conducted a program to exploit Ukraine, a breadbasket of the region, by taking Ukrainians’ food,  the fruit of their labor, and by starving them to death.

“Ukrainians would die in the millions, in the greatest artificial famine in the history of the world,” Snyder wrote—a fact badly obscured by pro-communist propaganda in The New York Times written by reporter Walter Duranty.

The Soviets would soon lose control, but Ukraine’s misery was far from over.

“In 1941 Hitler would seize Ukraine from Stalin, and attempt to realize his own colonial vision beginning with the shooting of Jews and the starving of Soviet prisoners of war,” Snyder wrote. “The Soviets colonized their own country, and the Nazis colonized occupied Soviet Ukraine: and the inhabitants of Ukraine suffered and suffered.”

This history has often been obscured by the fact that Germany betrayed the Soviet Union, pushing the USSR to ally itself with Great Britain and the United States to form a powerful, yet ideologically incompatible alliance in order to defeat a greater threat.

In August, 1939, Nazi Germany and the Soviet Union signed the Molotov-Ribbentrop Pact. In September, both powers invaded and occupied Poland together under this nonaggression treaty. The two belligerents continued to carve up much of Eastern Europe until Hitler’s ill-fated decision to turn on Stalin in 1941—which drove the Soviets into cooperation with the Allies.

It’s important to acknowledge this history, as much as Russia would like to ignore it.

Many were certainly saved from Nazi tyranny due to the Soviet Union’s war effort. The Soviet Union played a vital role in defeating Nazi Germany, supplying the manpower needed to grind down the German army on the Eastern Front. The Soviets even liberated most of the prominent Nazi death camps, including Auschwitz.

But those they liberated from Nazi tyranny would soon fall under another tyranny, one based in Moscow.

Only Great Britain and the United States freed people from tyranny writ large.

We must not forget that the Soviet Union entered World War II in league with Hitler and perpetrated its own heinous crimes in conquering Eastern Europe—before, during, and after the war.

The Allies came to Europe as liberators. The Soviets came to conquer, and they spent generations plundering Eastern Europe until the communist system came tumbling down in 1989, proving the failure of its underpinning ideology.

The Soviet Union’s role in World War II has often been misunderstood. Its image as one of the Big Three allies—along with Great Britain and the United States—was only created after a partnership of necessity was forged between the USSR and the free world in the final days of 1941. 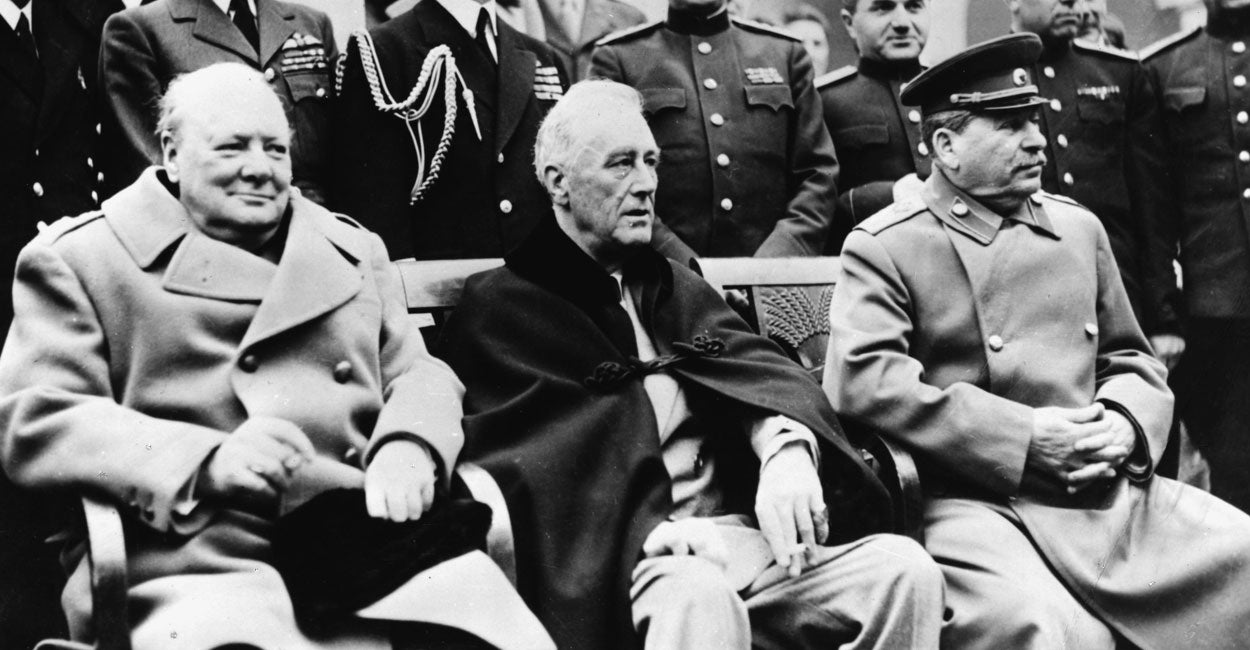 While the idea that the Soviet Union “won” World War II and saved us from Hitler is an increasingly common one, we should remember that the Soviet Union played a large part in starting the deadliest war in human history and had no qualms about aligning itself with fascists to accomplish its goals.

Communist and Nazi war machines worked together in the early days of the war to plunder their neighbors and commit mass atrocities unmatched in human history. This dynamic changed only when Hitler stabbed Stalin in the back and invaded.

It is important to keep this history alive, not just for the sake of historical accuracy, but to demonstrate the chasm of difference between free nations, built on the edifice of protecting individual liberty and freedom, and ones erected on an ideology of tyranny.

We should remember this today as a Russian Embassy attempts to shame the United States for its “inhumane” use of nuclear weapons at the end of the war.

Today marks 73 years since the inhumane and horrific A-bombing of #Hiroshima – not a military target but a city full of civilians incl women & children. 6 August 1945 will forever remain a tragic date in human history. Such tragedy should never be ignored or forgotten #NeverAgain pic.twitter.com/mIefZbN3Oe

Few countries in history have perpetrated or abetted more inhumanity on planet earth in the name of “progress” than the USSR of the mid-20th century.

The United States is far from a perfect country. It has often failed to live up to its own ideals. But the American way didn’t just produce victory in World War II, it produced prosperity and flourishing for its own citizens, and the citizens of countries it liberated and defeated.

By contrast, communism destroyed not just the satellite countries that the Soviet Union occupied and put under its thumb. It economically and spiritually destroyed Russia too—setting the nation back for generations.

This is a point of rebuke to both Russian revisionists and communist apologists.

Great Britain and the United States stood on the side of freedom, not just for themselves but—when backed into a corner—other people as well.

America did not go into the world seeking monsters to destroy. Villainy arrived at our doorstep, and we defeated it. The Soviet Union only sought to bring monstrous oppression to others, switching sides when it suddenly faced the threat of being gobbled up by another regime.

We need to remember this always, as a nation. Despite our comfortable position in the world, we must avoid falling into the trap of thinking ourselves unassailable, or freedom inevitable.

There was no “end of history” after the fall of the Soviet Union. Today, there are new tyrannies lurking in this world, ones that may also soon challenge our way of life.

And, much like in World War II, we must hope that we can again be a refuge for liberty in a world of spreading darkness—a shining city upon a hill.